East Slovakian village Nižná Myšla represents one of the richest archaeological localities in Slovakia where the primeval settlement of Košice and its environs is demonstrated.

Archaeological locality Nižná Myšla lies in the basin of Košice about 10 kilometres away of Košice in the south-eastern direction.

Since 1977 systemic archaeological research is carried out here. It is one of the best known site in Europe and the finds dug out here are of European importance. About 2,000 vessels and  5,000 bronze, bone and stone objects of different significance were discovered in Nižná Myšla. Interestingly, the finds also contain primeval toys, including the ornamented clay model of a four-wheel cart.

In an effort to display the archaeological finds as near as possible to the locality, an archaeological museum was established in the village Nižná Myšla  It is in the building of the former Premonstrastesian monastery from the 13th century. The exhibition area of the Museum is 400 square metres and it also contains a laboratory for restoration of the archaeological material. A special feature of the Museum is the exhibition of minerals and rocks and the unique entrance into underground catacombs built once by the monks.

The archaeological objects from the site are located in the municipal museum, which is open upon a phone call to the Municipal Office in Nižná Myšla. 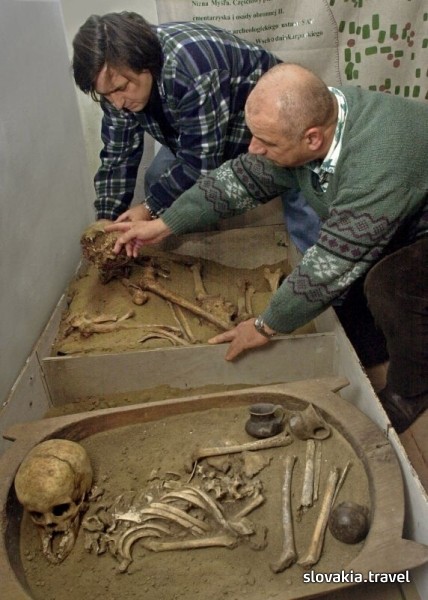