June 21st to 28th, 2018 the capital of Slovakia will get back to its most famous times during fabulous Coronation Ceremonies. Watch the royal past come to life and discover places breathtaking in their history that have witnessed the crowning of monarchs.

At the time Pressburg, as Bratislava was known in English, became the coronation city when the Ottoman Turks conquered Hungary and occupied previous site of coronations. It was in St. Martin's Cathedral that ten men were crowned king between 1563 and 1830, along with a reigning queen and seven queens consort.
Bratislava's streets today have churches and buildings lining them where historical events have taken place and there are still houses along the coronation route and squares existing that have witnessed coronation ceremonies. Part of the original coronation procession route is today marked with brass crowns embedded in the pavement.
Follow in the footsteps of kings and walk the route of the original coronation procession and get involved directly in the ceremonies as they are reenacted by actors and enthusiasts wearing period costumes.
Multiple-day celebrations are accompanied by a number of events, jousting tournaments featuring knights in armor, theater and music performances, lectures and exhibitions, guided tours, children's interactive programs and fun for all.
This year, Bratislava will re-enact the coronation of Leopold II, the younger reigning son of Maria Theresa, who was crowned in Bratislava in 1790. After the death of his eldest brother Joseph II, former Grand Duke of Tuscany became a Holy Roman Emperor and thus also a King of Hungary, besides other titles. He was crowned in the city on November 15th, 1790, however reigned only for less than 16 months.
The main program is scheduled for Saturday right on Hviezdoslav Square, with oxen to be roasted on a spit from dawn to dusk. The coronation tour starts at 1 p.m. and runs from Bratislava Castle through the centre of the city to end at Franciscan Square.
At 1:30 p.m., Leopold II will be crowned king at the Main Square's Jesuit Church of the Most Holy Savior and the ceremony will be shown live on a big screen at Hviezdoslav Square. The program continues with the dubbing of knights into the Order of the Golden Spur, the coronation procession and the scattering of coronation tokens on the Main Square. This wonder day ends with a feast accompanied by music and dancing.
To stay in coronation mood, Bratislava Coronation Days will take place from June 22nd to 29th in the city and for over three days there is also the Blaufränkisch Festival, with fine wine at the Main Square ready for you to enjoy from June 22nd to 24th. On Friday and during the weekend, a traditional crafts fair takes place at Hviezdoslav Square.
When Hungary was under siege from the Turkish threat, Bratislava became the capital of Hungary and its official coronation city. From 1563 to 1830, ten Hungarian kings, one queen and seven royal wives were crowned at Bratislava's St. Martin's Cathedral. Even today, almost 200 years after the last coronation in Bratislava, you can still meet witnesses of the glorious coronation story. In the first place, the castle, the royal residence of the Hungarian kings. At the castle not only residential spaces of the Royal family have been located, but in one of the towers, the crown jewels of the Hungarian kings were housed. The coronation ceremony was held at St. Martin's. At the top is the gold-plated replica of the royal crown, which weighs about 150 kgs. After the coronation of the king went to the oldest church in Bratislava, the Franciscan Church.
In the world, there are very few places where coronations have taken place. Reims - Coronation city of the kings of France, Prague - city of coronation of Czech kings, Frankfurt - Coronation city of the emperors of Holy Roman Empire. This includes the coronation city of Bratislava, the capital and coronation city of Hungarian kings, which is the capital of the Slovak Republic at the time. The coronation period lasted almost 300 years. During this period, the Crown received 18 kings and queens in Bratislava. Among the most important monarch Maria Theresa was crowned on June 25th, 1741.
There is an authentic coronation ceremony taking place. The King gets the crown jewels from the Archbishop of Esztergom, Primate of Hungary, followed by the accolade , the coronation oath and procession to coronation hill. This ceremony takes place every year during the last weekend held in June - to commemorate the coronation of Maria Theresa.
Every coronation is staged according to historical documents. It is performed by hundreds of actors in period costumes. The king receives St. Stephen's crown from the archbishop of Esztergom –the Primate of Hungary – along with other coronation insignia: the sword, cloak, orb and scepter. After the coronation ceremony, he appoints the knights of the Order of the Golden Spur, takes the oath to the country and promises to maintain the integrity of the country on the coronation hill.
This year, you can attend the authentic coronation of the fourty-three years old Leopold II as the King of Hungary, conferring the knightly accolade upon knights of the Order of the Golden Spur, the coronation oath, coronation coins will be thrown, folk fete and a firework on the occasion of the Coronation Ceremony, a traditional event which takes place in Bratislava at the Franciscan, in Primatial and Hviezdoslav Squares.
The coronation ceremony is one of the greatest cultural events in Slovakia which are annually attended by thousands of local and foreign visitors. The ceremony is also a good promotion for Bratislava targeting at the people in Austria and Hungary, as especially Austrians and Hungarians annually arrive in Bratislava to see the Coronation Ceremony. This year is the 455th anniversary of the Coronation City of Bratislava. Many actors will make a show in historical costumes in the accompanying programme of the ceremony.
All freaks of history and delicious food and good entertainment are cordially invited to the Coronation Bratislava. You can enjoy the coronation ceremony at the Hviezdoslav Square and the children can play at the historical play area at the square. In the stands, you can buy grilled Hungarian sausages, roast meat, coronation goulash and Pressburg bagels, coronation wine and beer, as well as the beer of the royal brewery. 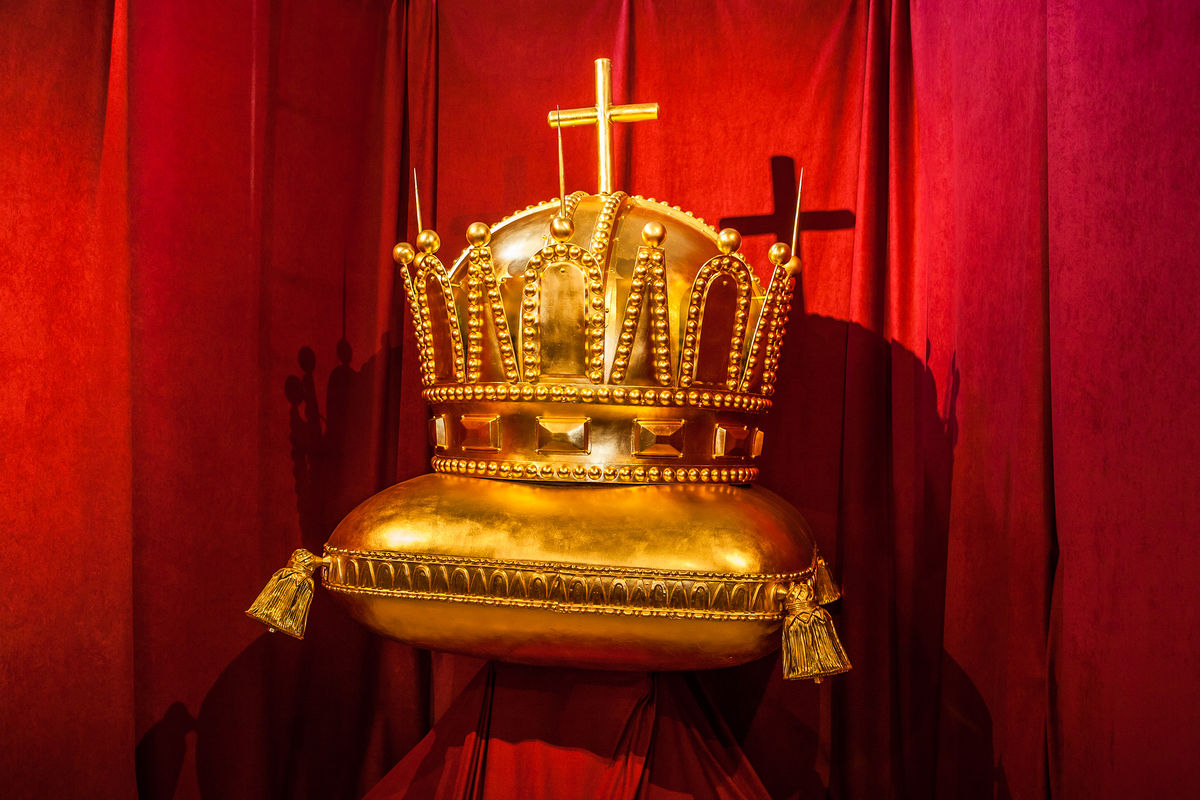 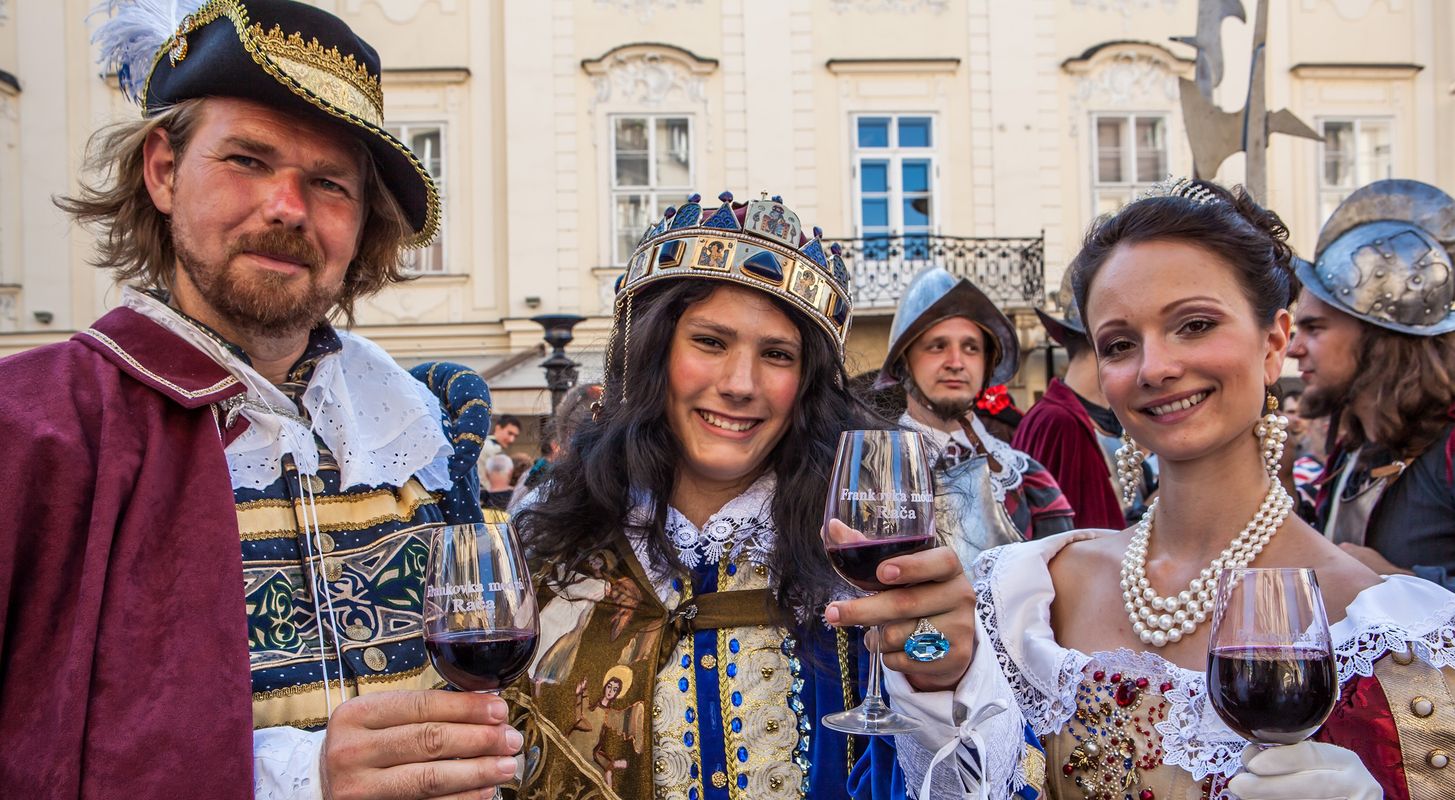 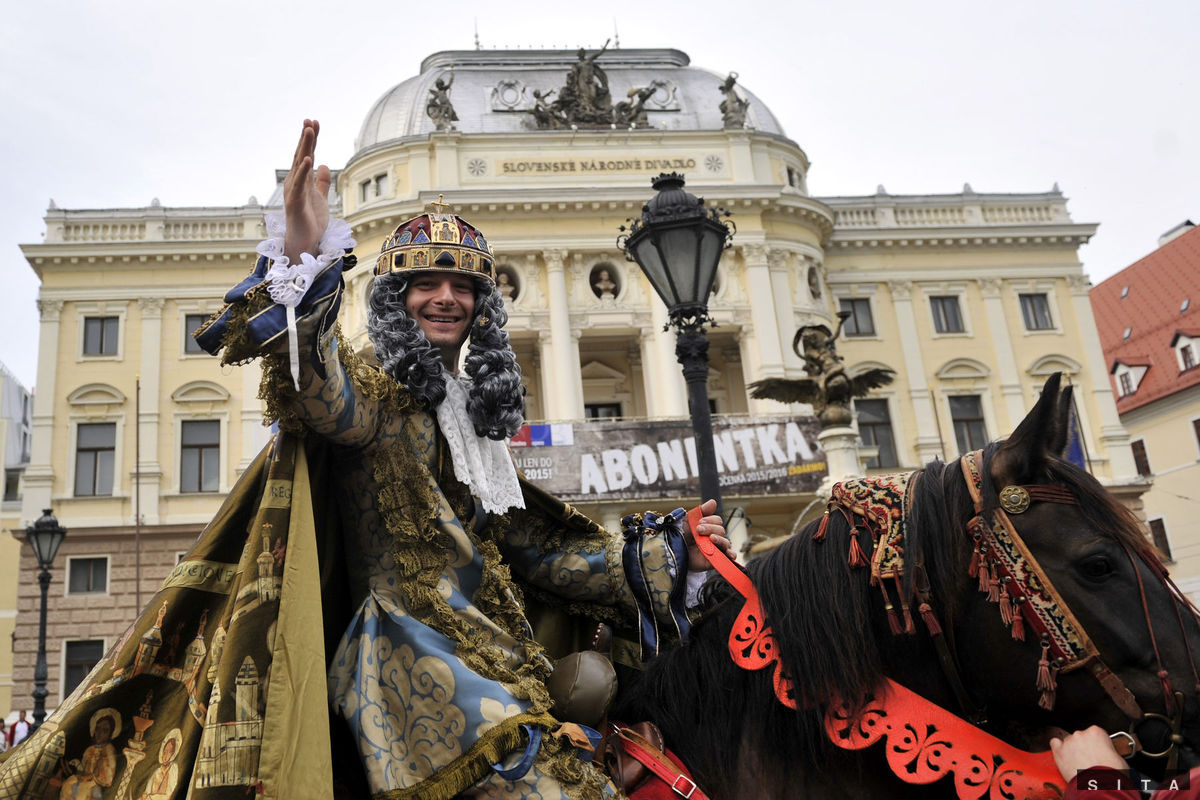 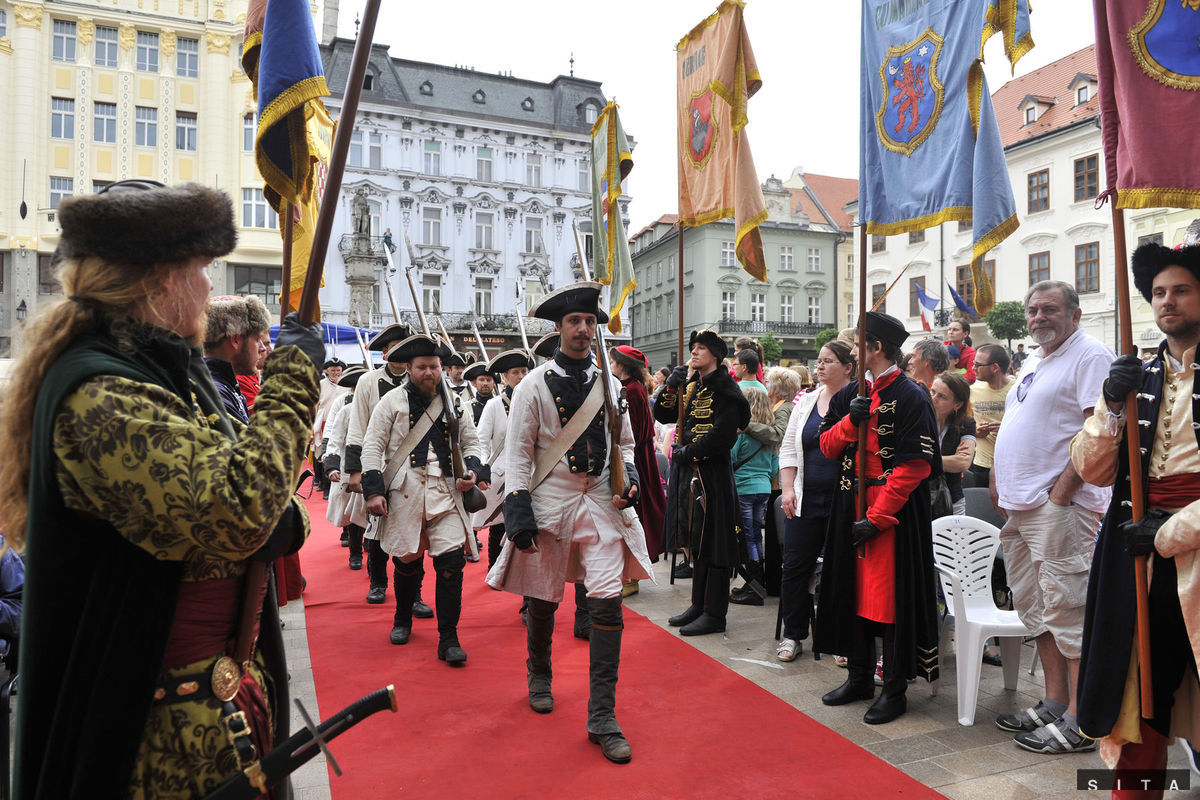 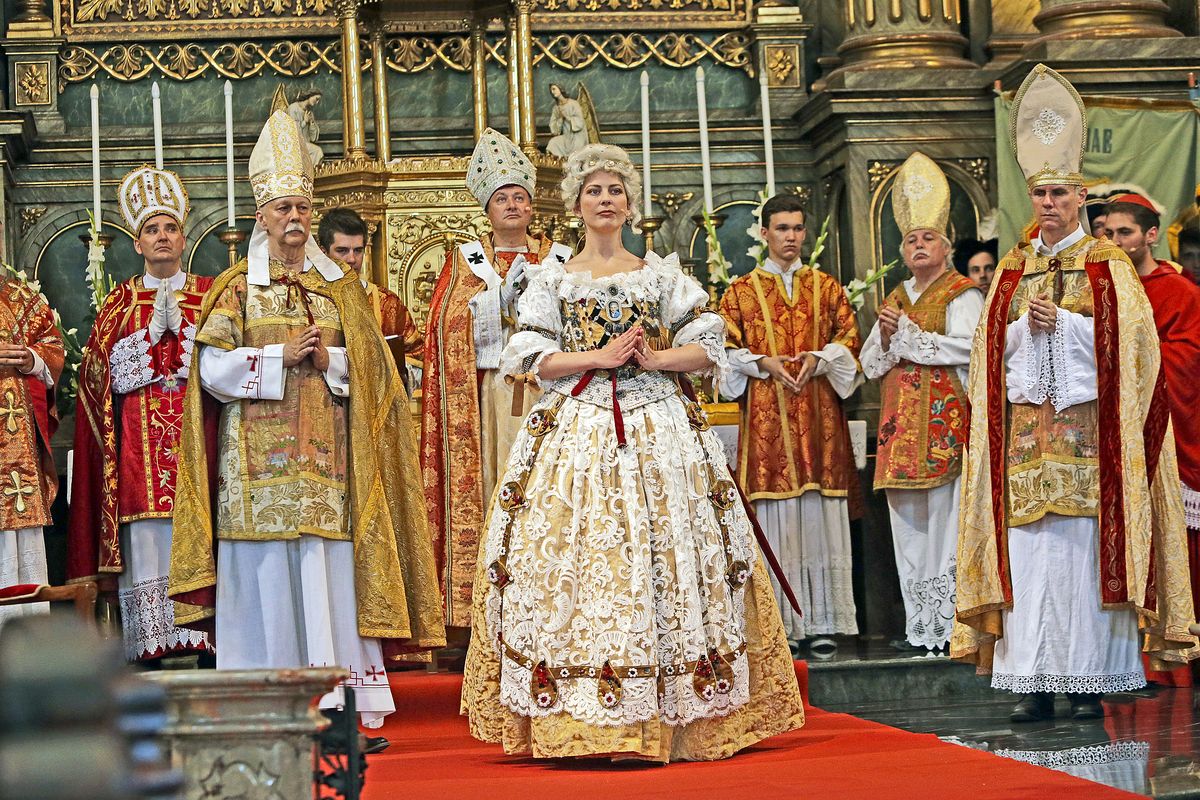 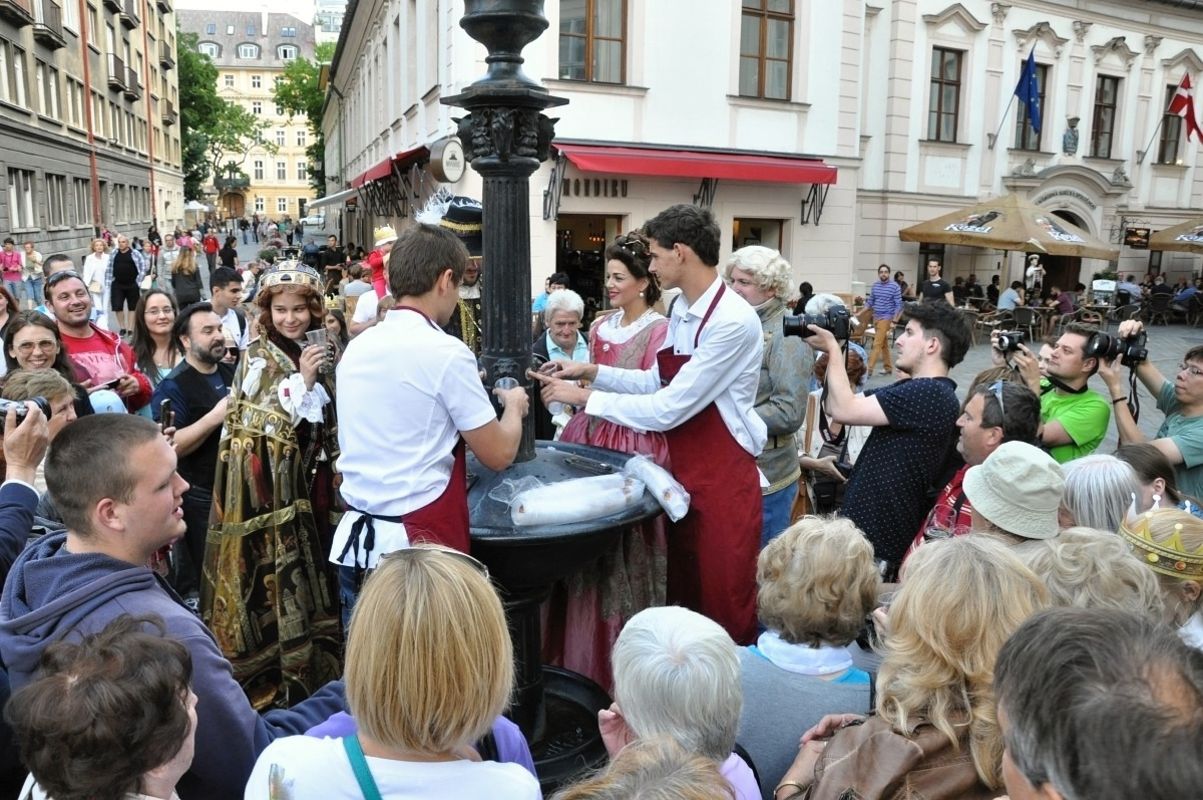 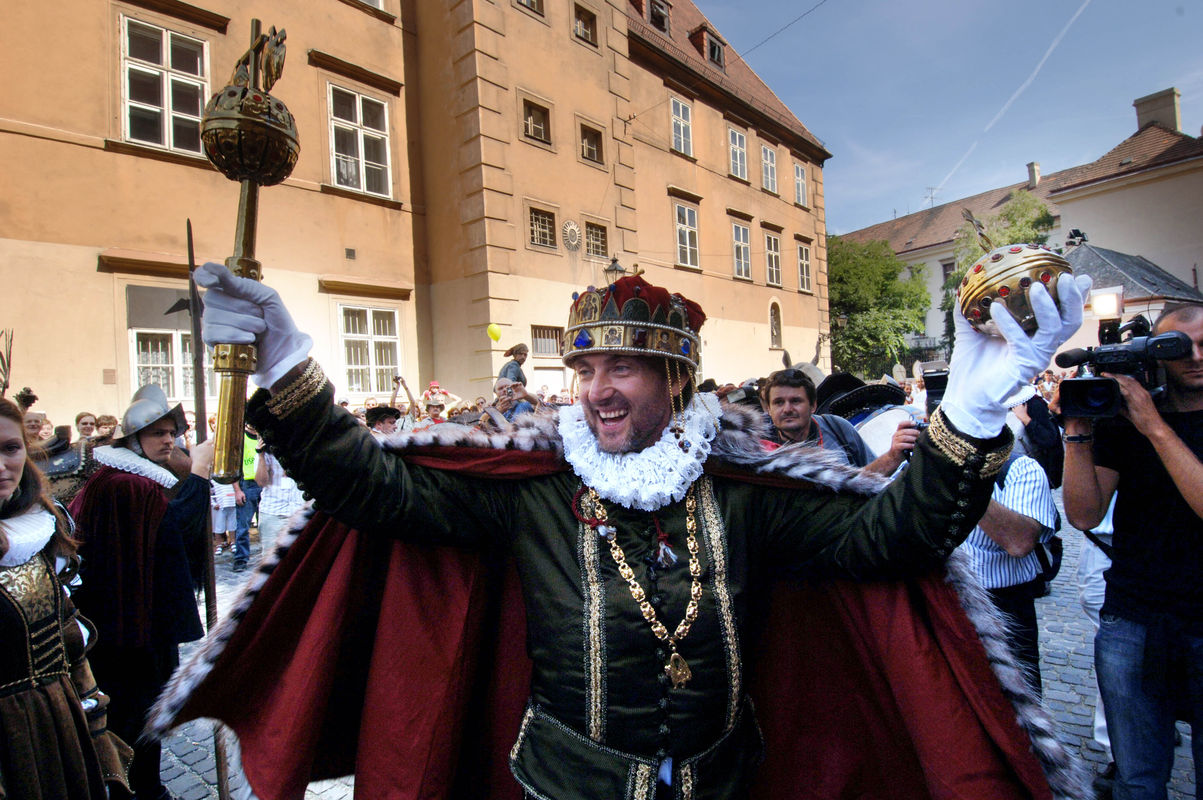 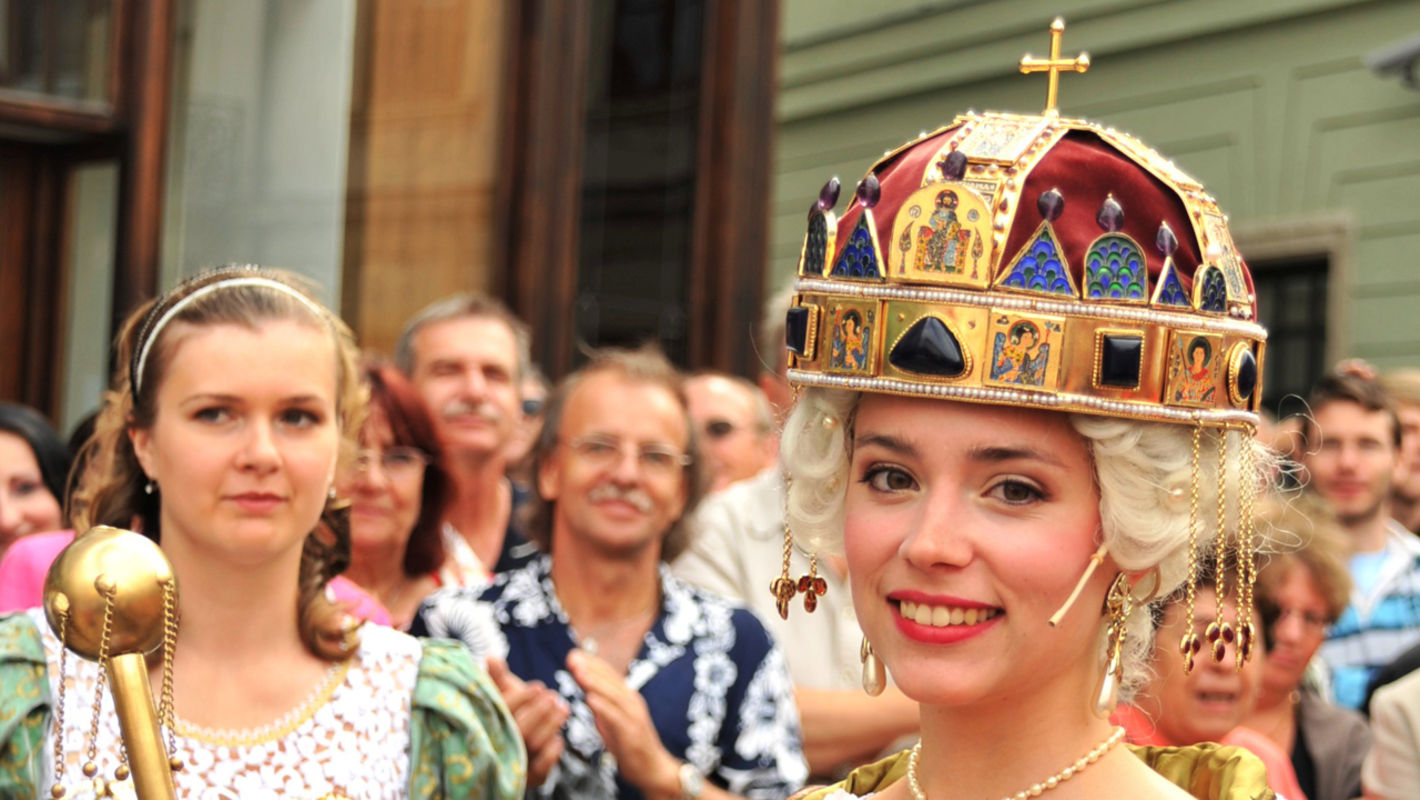 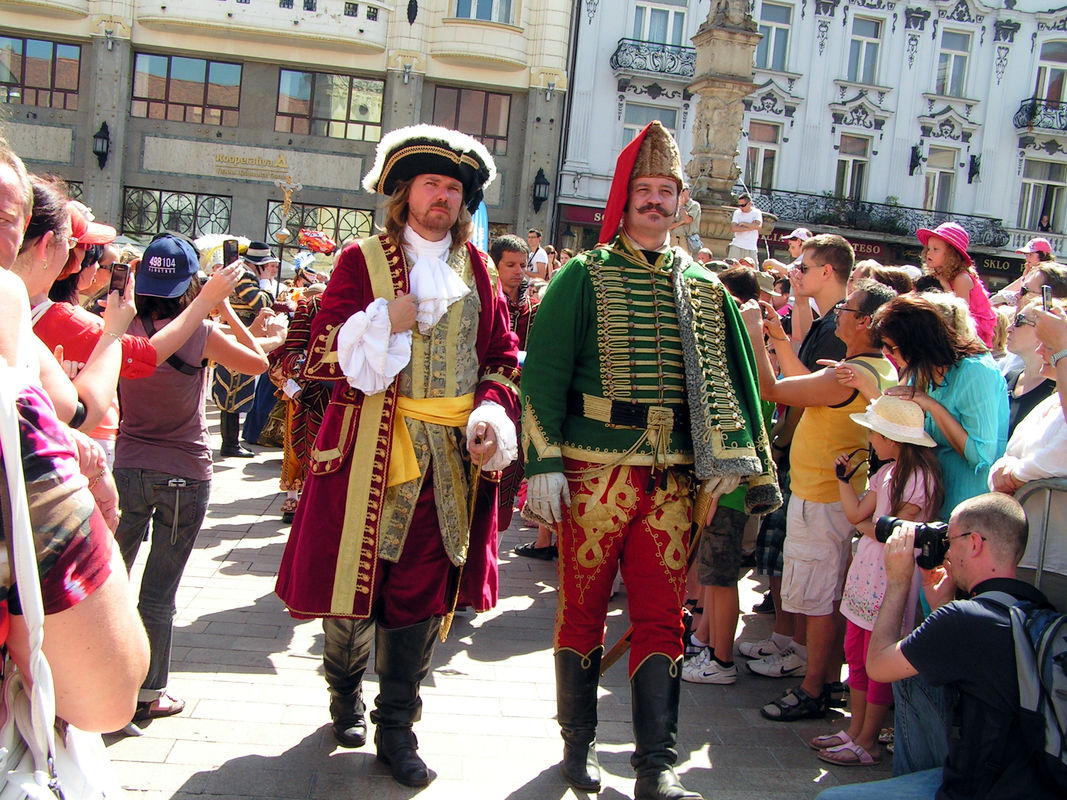 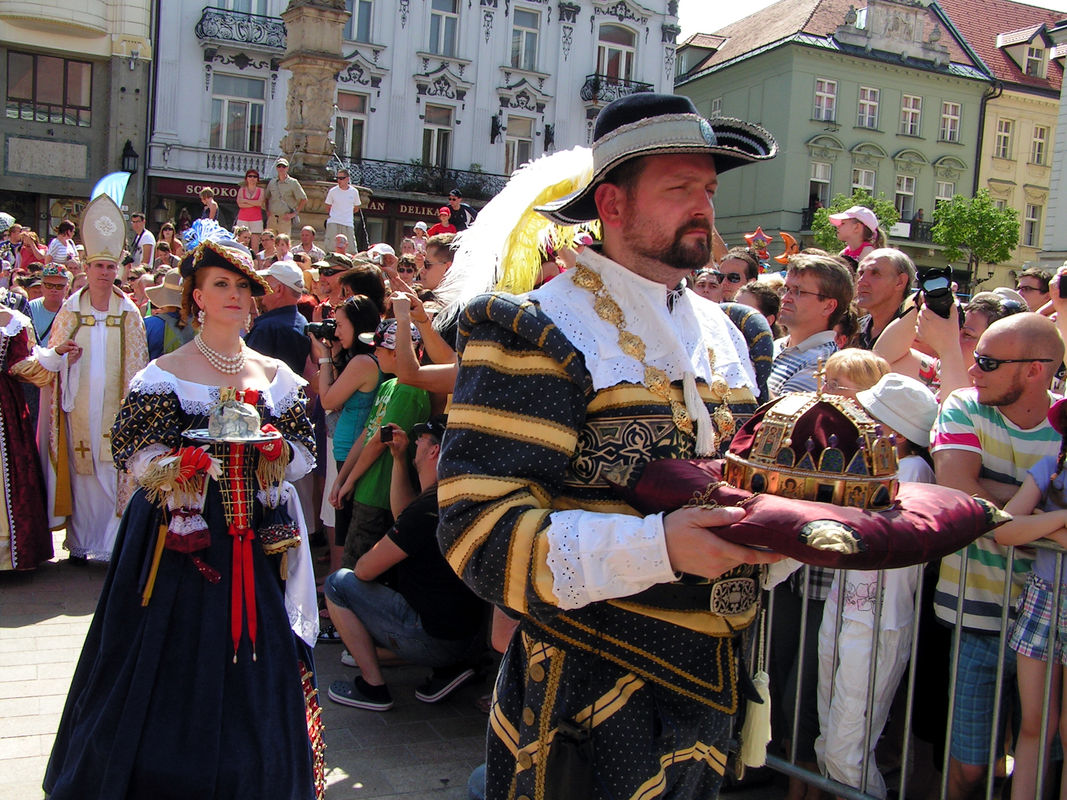 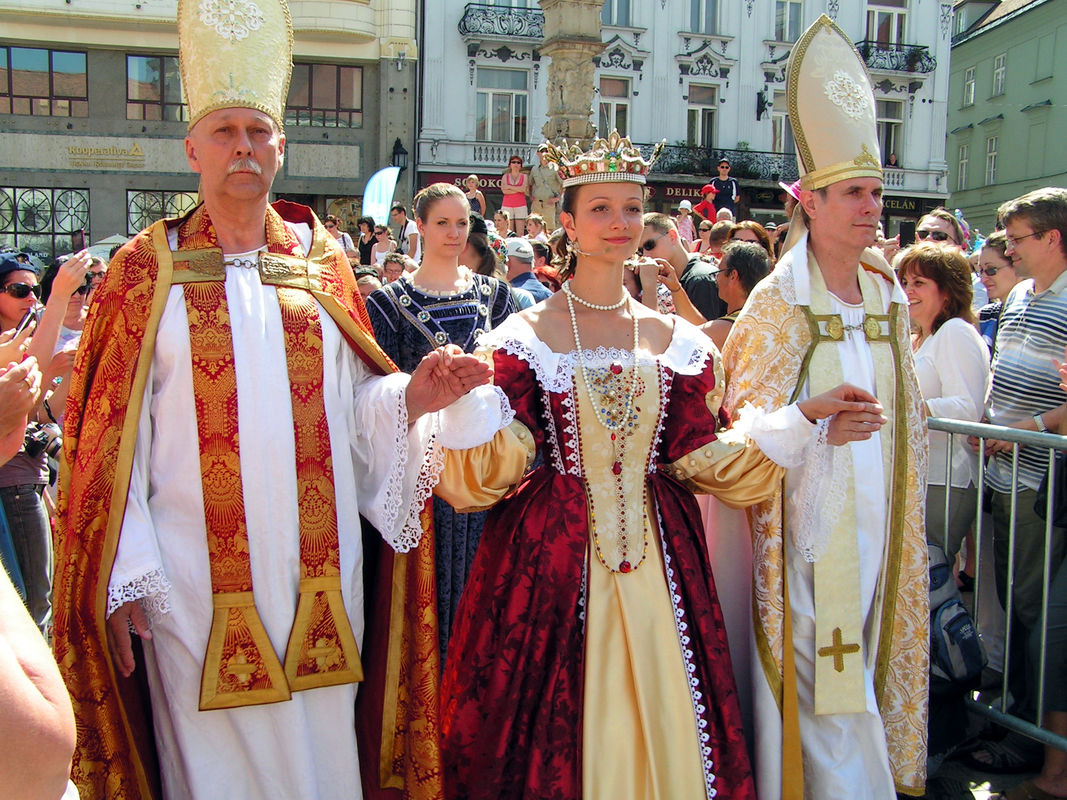 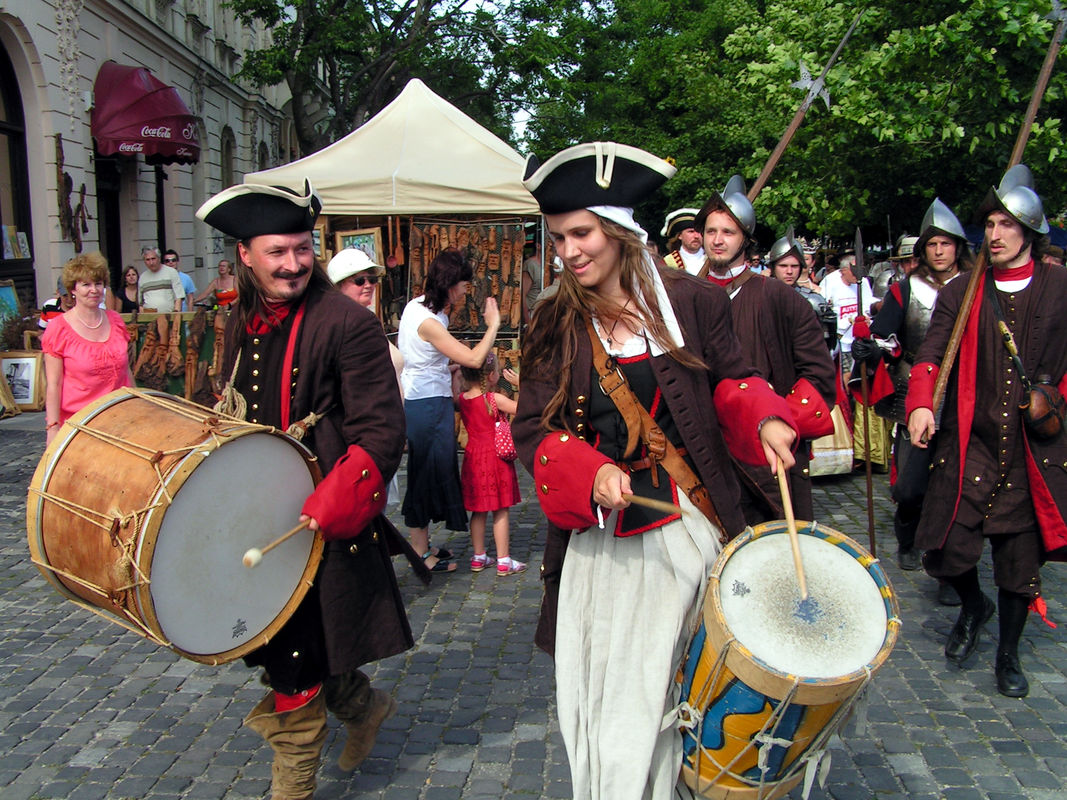