Banská Štiavnica lies amid the forests of the Štiavnické vrchy Mts. and is included on the List of the UNESCO World Heritage List.

Extraction of precious metals in central part of the Štiavnické vrchy Mts. enjoys a very long history. The area was first mentioned in the document from 1156 as terra banensium or the land of miners. Silver ore prevailed among the mined metals and Banská Štiavnica won the attribute of “silver town”.

Banská Štiavnica progressively became the biggest mining centre in the Habsburg Monarchy in the 18th century. In the period between 1790 and 1863 the mountains surrounding the town yielded 490 metric tons of silver and 11 tons of gold. Mining schools and science also flourished in the town. In 1735, the oldest mining school in the Kingdom of Hungary was founded here, which was promoted to the Banská akadémia (Mining Academy) in 1762, the first university of its kind in the world. In 1846 it joined the Forest Academy founded in 1808 to form one common entity. Prosperity and fame returned to the town for some time and by the end of the 18th century Banská Štiavnica was the third biggest town of the Kingdom of Hungary with 23 thousand inhabitants.

But the development of the town reached the deadlock at the end of the 19th century when mining fell in decay. This trend also continued in the 20th century. The last mine in Štiavnica was closed down in 2001.

The buildings in the historic centre are included in the Town Monument Reserve. The Banská Štiavnica reserve comprises as many as 360 structures. Together they present a unique set of high cultural and historical value, which is set into the wonderful environment of the Štiavnické vrchy Mts.

The dominant sight of the town centre is Old Chateau (Starý zámok) west of the Trojičné námestie square. The oldest part of the Chateau is the former parish church of the Virgin Mary. It was built together with the adjacent ossuary in the 13th century as the three-aisle Romanesque basilica. Today the Old Chateau houses the museum. Collections of pipes and targets are its especially interesting exhibits.

On the opposite hill New Chateau (Nový zámok) stands since 1571. It is also used for museum purposes. There is an exposition documenting the Turkish wars and the Chateau provides a beautiful view of the town.

The majority of monuments of Banská Štiavnica are concentrated into the area spreading between the Trojičné námestie square and the Radničné námestie square. The squares are separated from each other by the Gothic church of St. Catherine from the late 15th century and the Town Hall building with its slender clock tower.

In the centre of the Trojičné námestie square skirted by old burgher houses and public buildings, the wonderful Trinity Pillar stands. The biggest building situated on the Trojičné námestie square is the Hellenbach House, where originally the Mining Court had its seat and which later belonged to the Mining and Forest Academy. Another bulky building stands on the Kammerhofská ulica street. It is the building of the "Kammerhof" or  the Chamber Office which was constructed in 1550 by adaptation of several Gothic houses. Today it is the principal building of the Slovak Mining Museum. Its most attractive exposition is the Open-air Mining Museum which offers the possibility to descend to one of its pits.

The Baroque Kalvária (Calvary) in Banská Štiavnica – 23 sacral monuments situated in the beautiful Štiavnické vrhy hills is something the visitors simply cannot overlook. 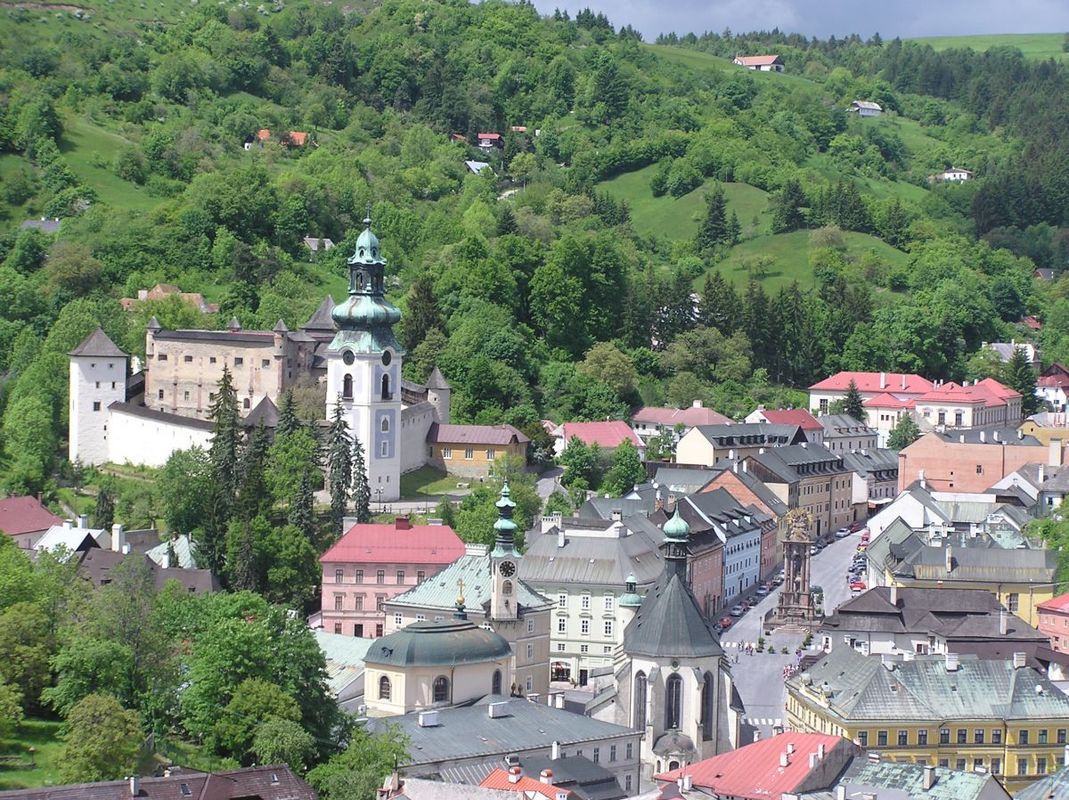 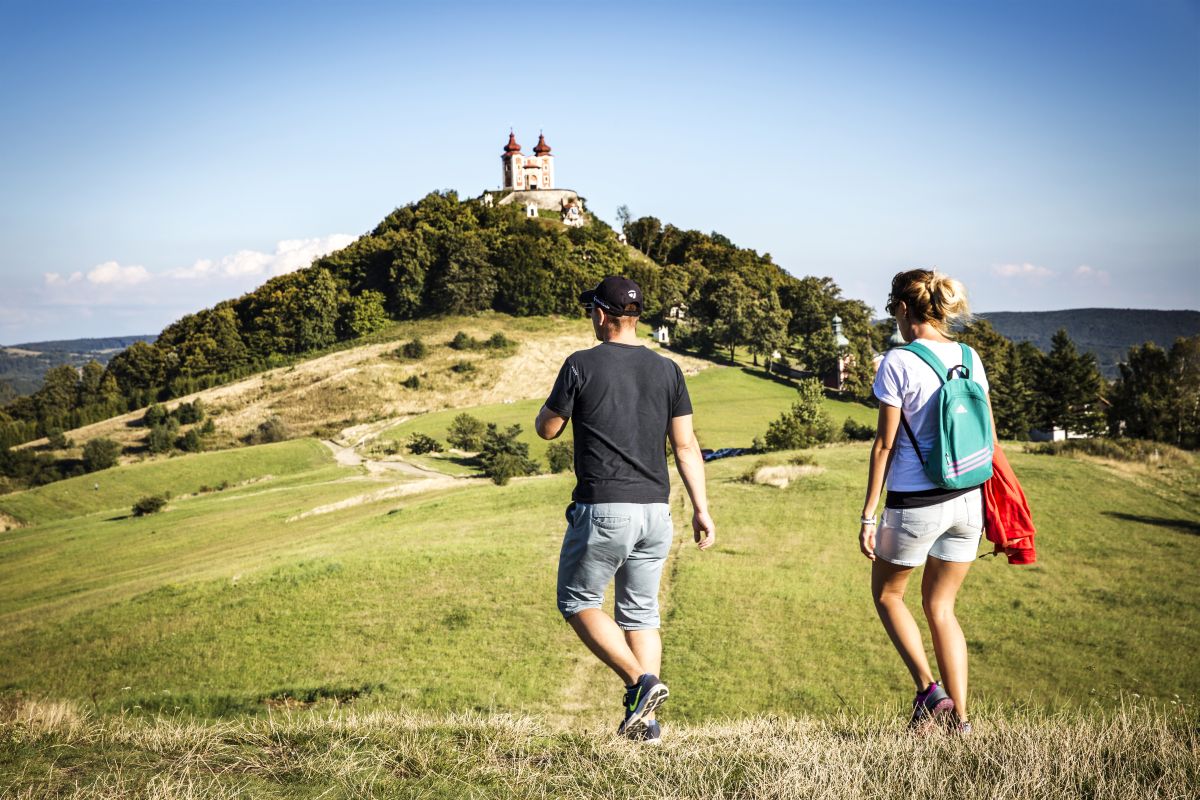 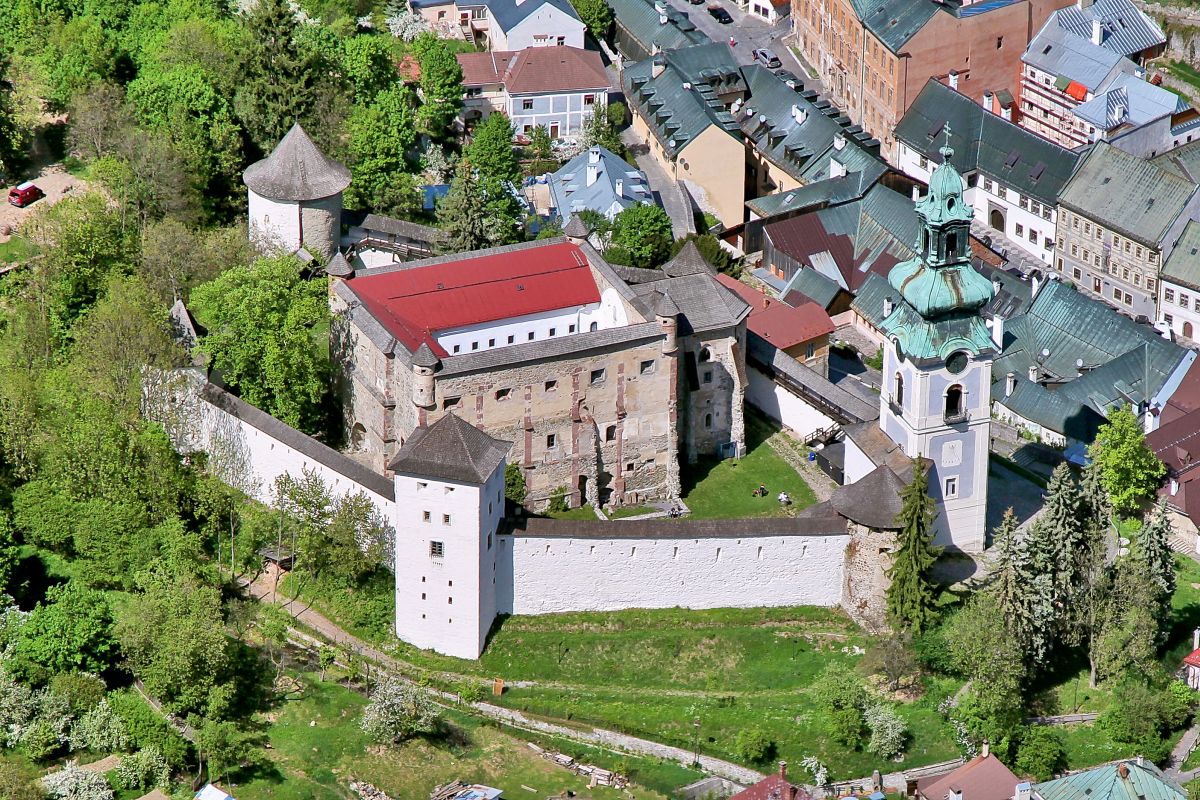 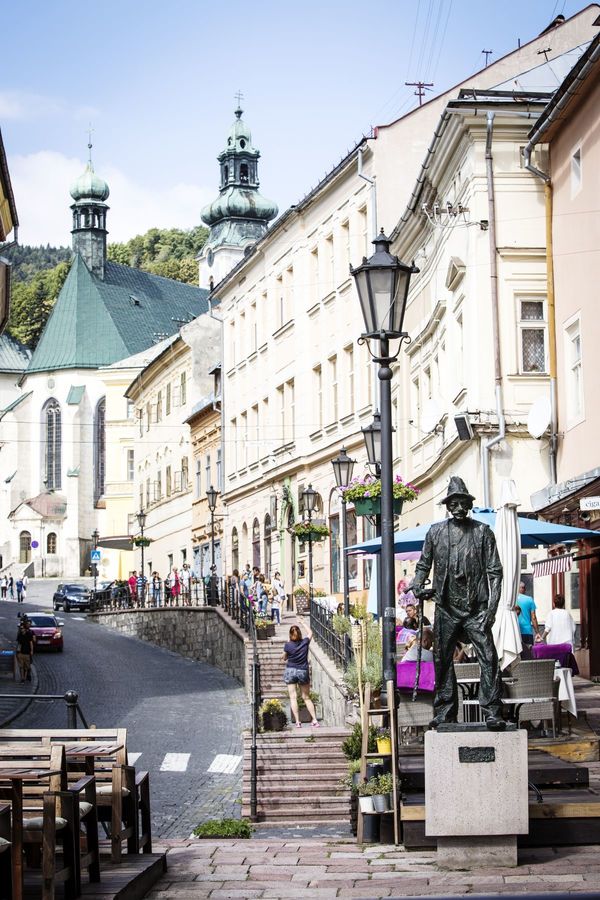 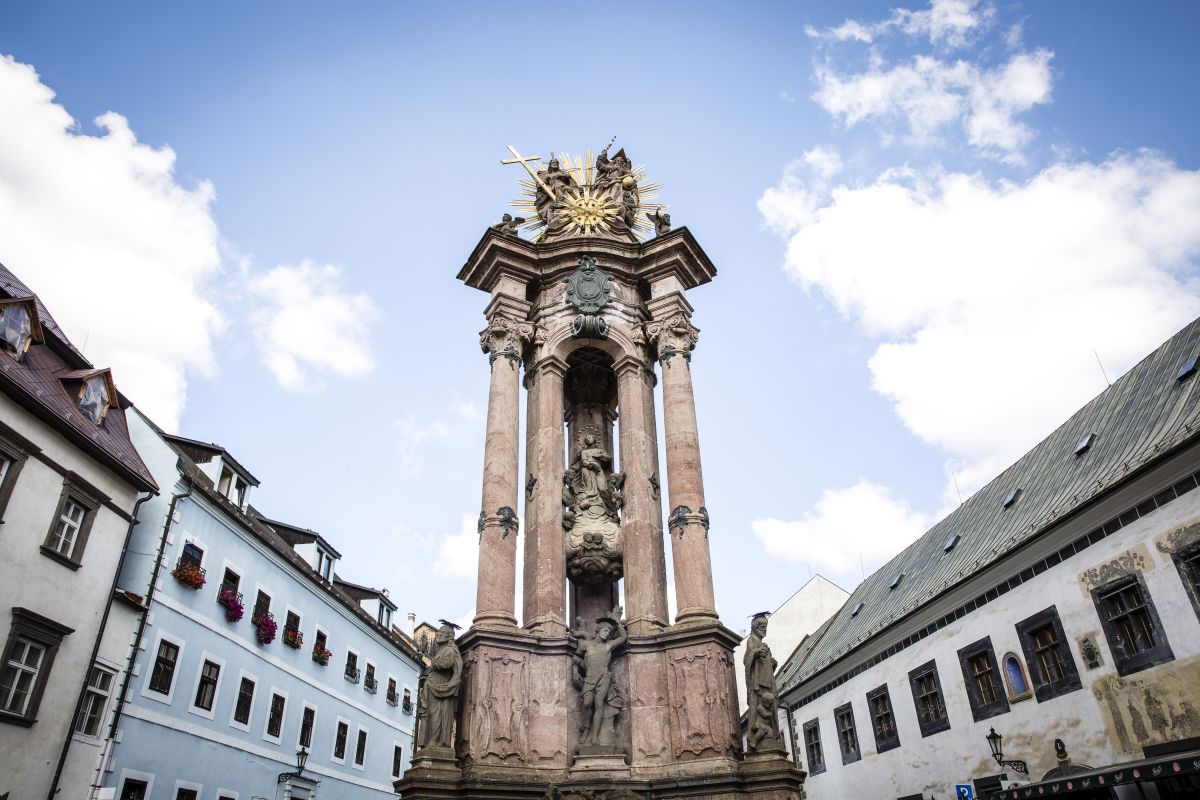 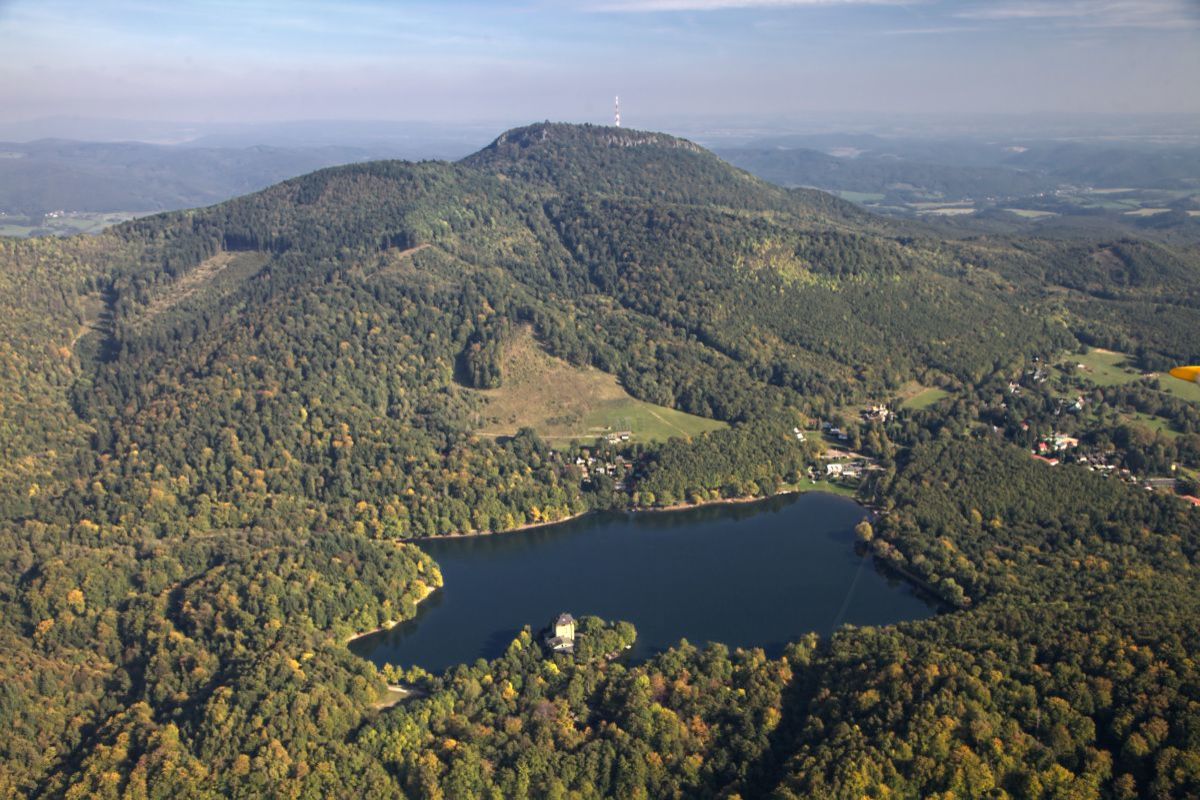 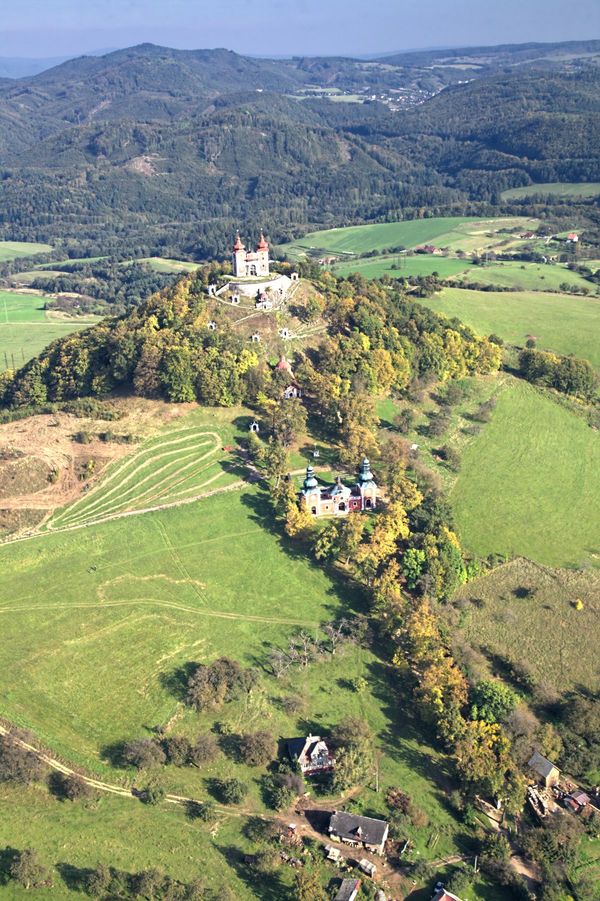