The outskirts of the town of Liptovský Mikuláš are quietly guarded from the north-eastward by the hill Háj. At this place you can find the commemorative area with a cemetery and the war memorial dedicated to soldiers who were killed particularly in the spring 1945. This place should remain the symbol of patriotism which helped to resist fascism even at the cost of losing soldiers’ lives.

At this commemorative area one of the most severe and longest battles of the World War II took place. This battle can be compared to the ones which were fought at Dukla.

The commemorative area was open to the public on 9 May 1961 and it was created by architects Ladislav Bauer, Aladár Búzik and sculptors Alfonz Groma and Miroslav Ksandr.

In the middle of this vast area you can find a monumental stairway. On its left side there is a group of statues, which presents taking the oath at the battle flag and its right side symbolises peace and victory. At the highest step of the stairway there is a dominating part – the pylon, the top of which is decorated with a five-pointed star. In the lower part there is relief plastic depicting flag veneration, helping to wounded comrades, wreath laying ceremony and the scene over the grave.

On both sides of the memorial there is a cemetery. Nowadays, it is the burial place for over 1,350 soldiers.
This place was intended for battles intentionally, you can clearly see the whole landscape from there. If you want to enjoy this view, all you have to do is to go to the Rachmanin Square in Liptovský Mikuláš and then turn left, go along the Captain Nálepka Street and after you cross the railway crossing, the Street of Heroes (Cesta Hrdinov) will lead you directly to the commemorative area. 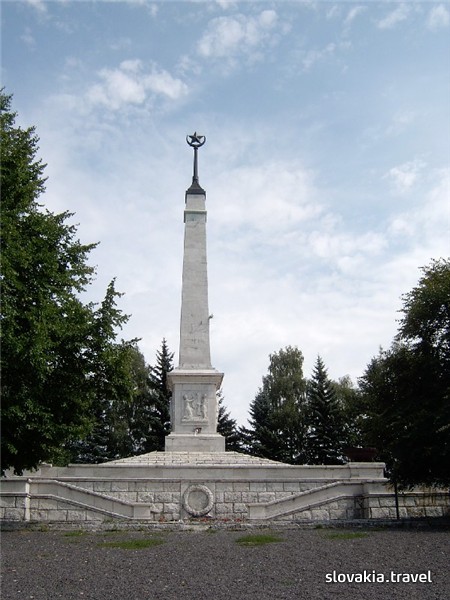