The painting of the “merciful Virgin Mary of Trnava” can be found in the Baroque  Lady Chapel at the St. Nicolas Basilica in Trnava, the construction of which in years 1739 – 1741 was arranged by archbishop Imrich Esterházy.

Virgin Mary of Trnava is a copy of the painting from the Basilica of St. Boniface and St. Alexius in Rome. The tradition says that St. Alexius left Rome for Syria and lived there as a hermit.  After many years he returned from Syria with a painting of Virgin Mary and lived in Rome  beneath the staircase of the house of his parents. After his death, his parents finally learned that it was their son. They built a chapel there and placed the painting in the chapel. Later on, a church  was constructed over the grave of St. Alexius.

It is assumed that the elaboration of the copy located in Trnava was arranged by the to-be cardinal Francis Forgách during his studies. After his return in 1585, he placed the painting in the St. Nicolas Basilica.

In 1663, blood tears appeared on the painting. Then, Hungary was under the Turkish menace; however, the Turks did not attack Trnava, though they plundered the surrounding. The painting wept three times during the  Kuruc (anti-Habsburg) war in 1708, specifically on July 5,  August 10 and August 11. Then, a commission was established to investigate the "weeping case". Based on the results of the investigation, Archbishop of Esztergom Kristián August approved public worship to the painting of Virgin Mary of Trnava on 19 December 1708. In 1710, there was plague in Trnava. When all human means failed, helpless people of the town headed by the town council appealed to Virgin Mary for help. They made a vow to celebrate, after a preceding period of fasting, the Blessed Virgin Mary and to serve a holy mass at the blessed painting. They prepared a deed in memory of this fact. They prayed, fasted and on 21 November 1710, on the Day of Blessed Virgin Mary, they took the painting and walked with it in the streets. On that day the plague miraculously ended.

The worshiping of Virgin Mary later on underwent periods of bloom and periods of lack of interest. After years of decline, the worshiping was revived in 1940s when a new tradition of novena was established. Nowadays, believers visit the painting to ask for God`s help and to thank for the grace bestowed. 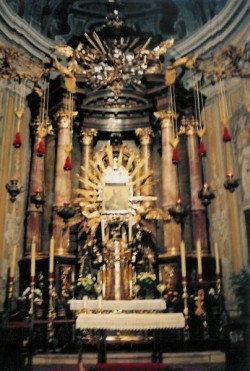 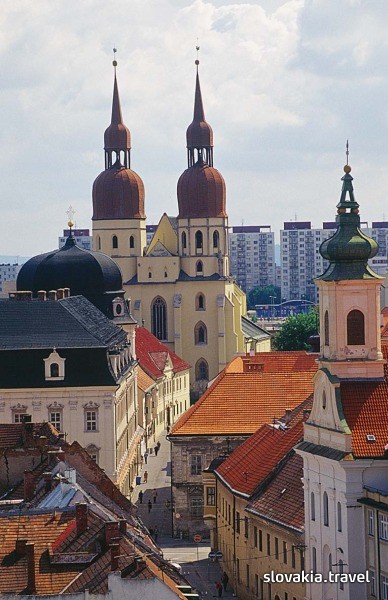