The wooden churches represent one of the best examples of European wooden religious architecture from the late Middle Ages to the end of 18th century. They represent a unique example of synthesis of two major cultures – Eastern and Western, Byzantine and Latin. 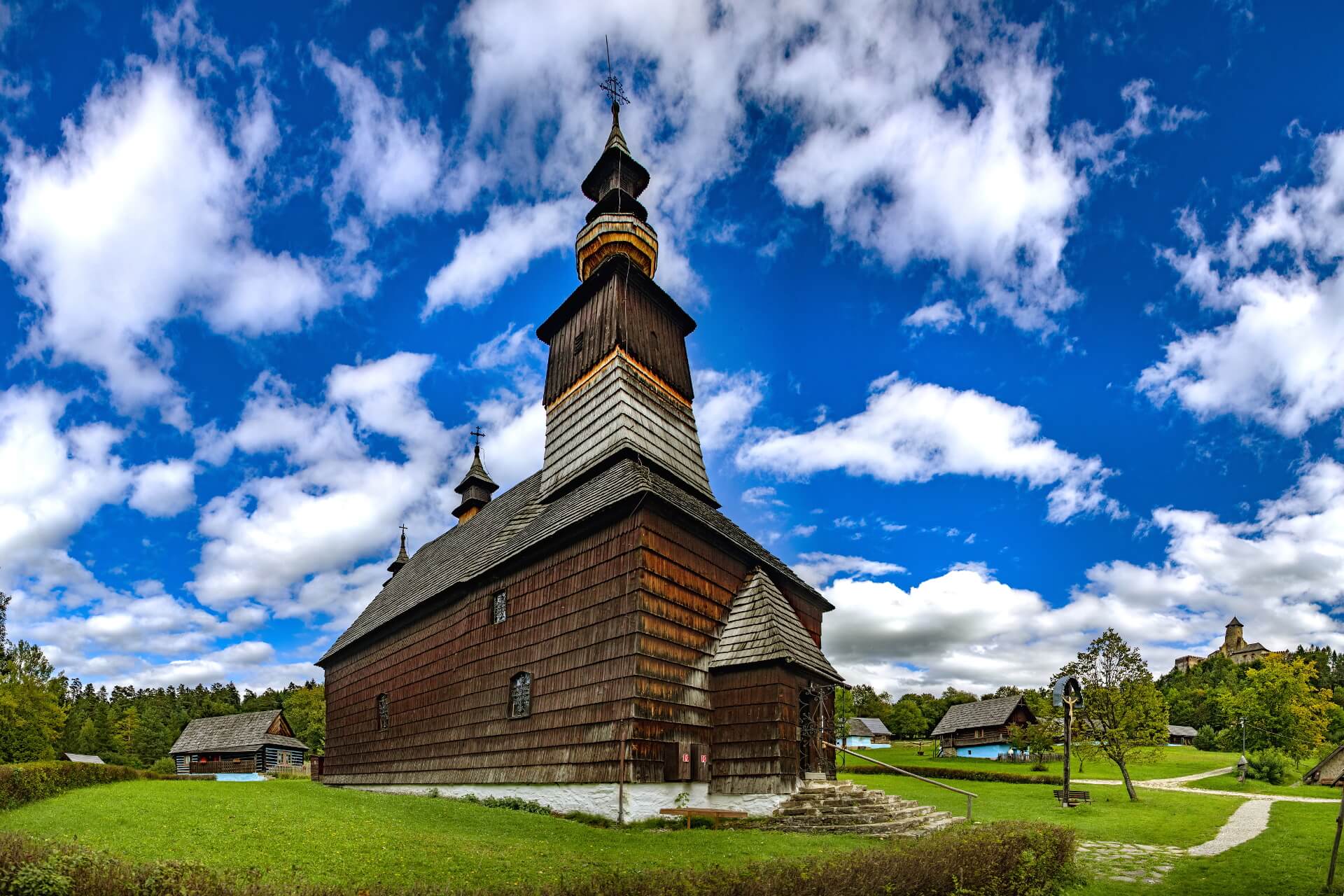 From the original number of about 300 wooden sacral constructions in today's Slovakia, following action of natural disasters, confessional, social and political changes, there have been preserved around 60 of them up to the present day. Among them, the Greek Catholic ones make up the biggest portion. 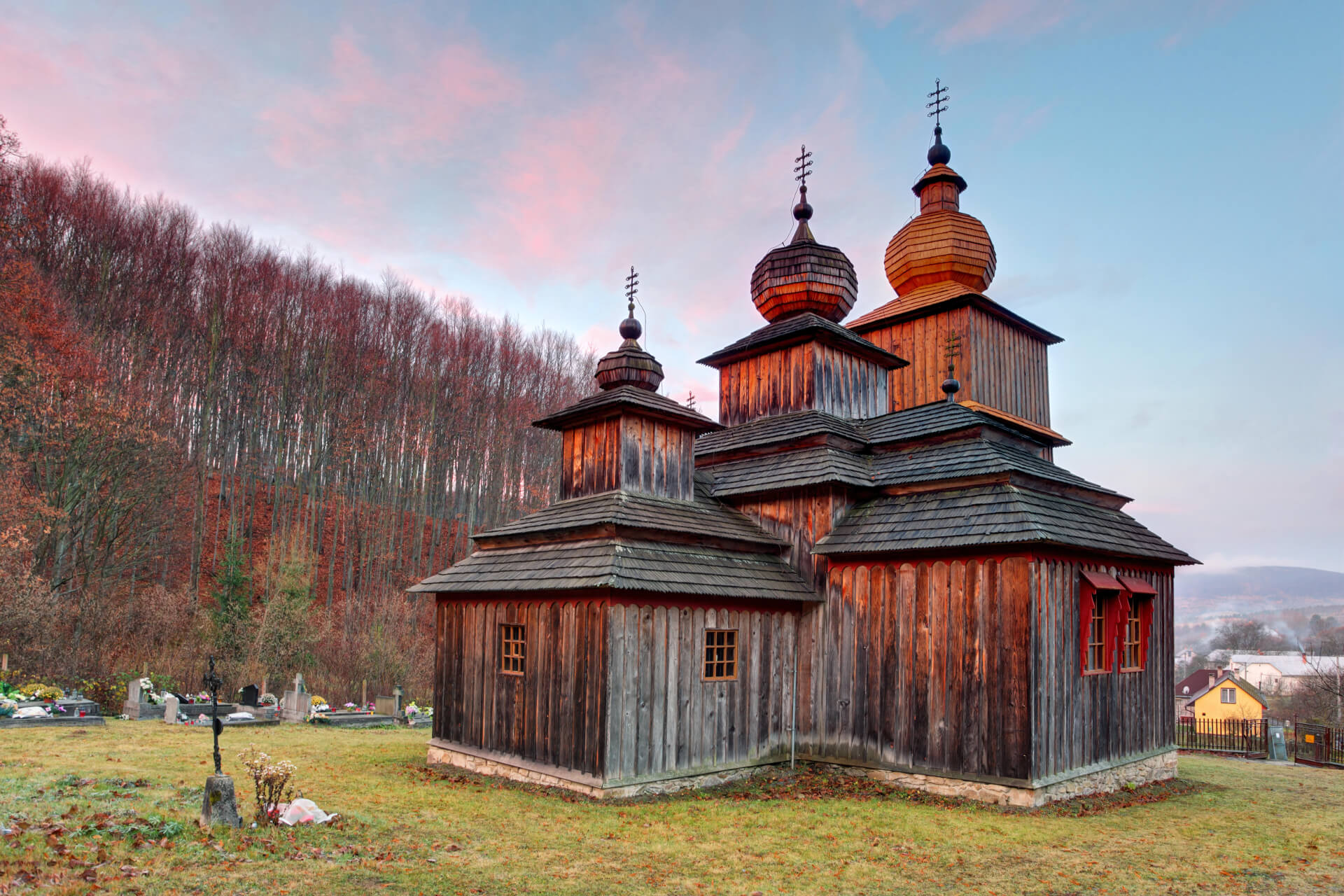 This phenomena is an outstanding testimony to the sacral architecture, illustrating the coexistence of different religious faiths within a small territory of central Europe. The churches also bear testimony to the development of major architectural and artistic trends during the period of construction. 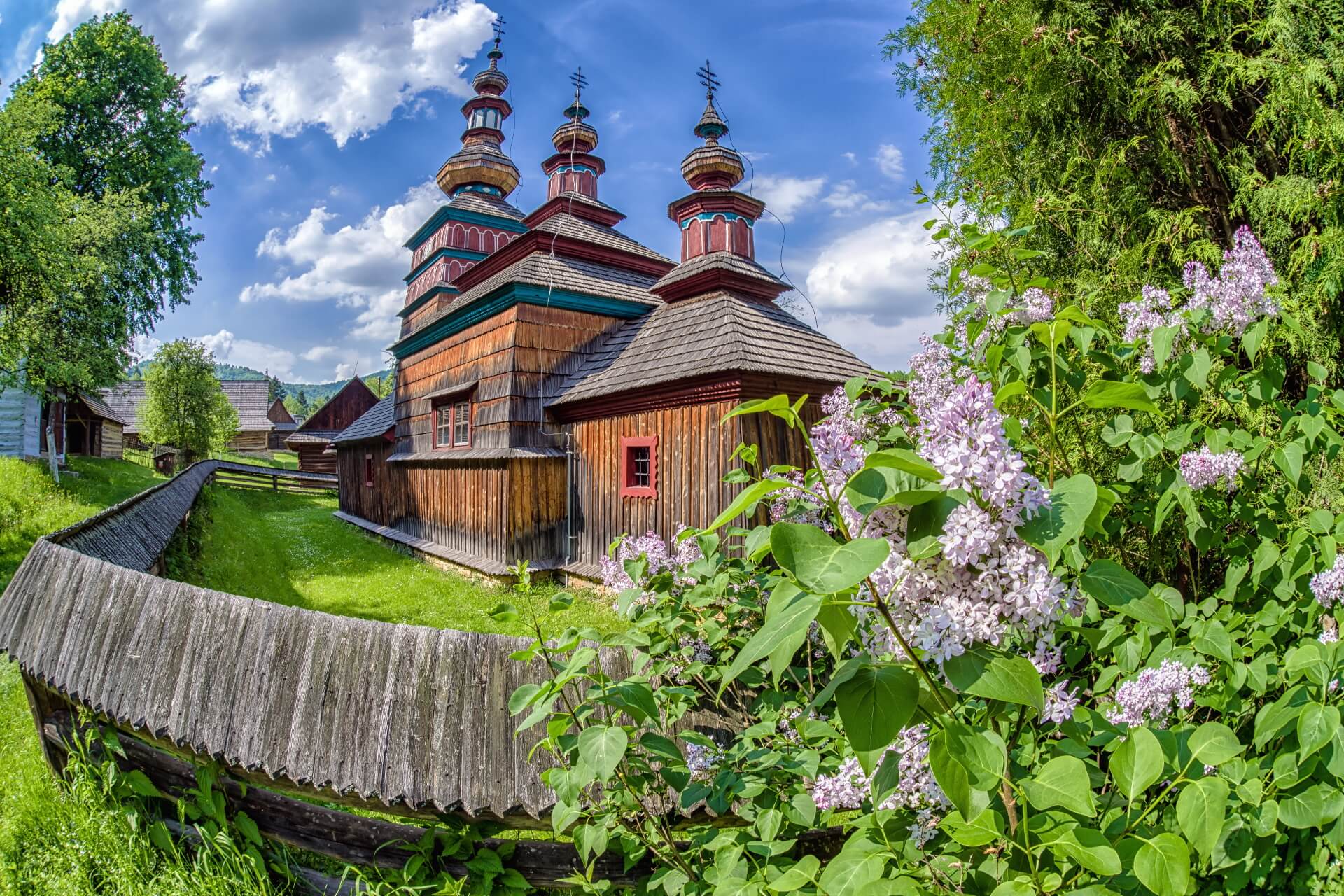 In Slovakia, wooden churches are mostly associated with Eastern Slovakia and the Greek Catholic Church. But Slovakia also has interesting wooden Protestant and Roman Catholic churches. 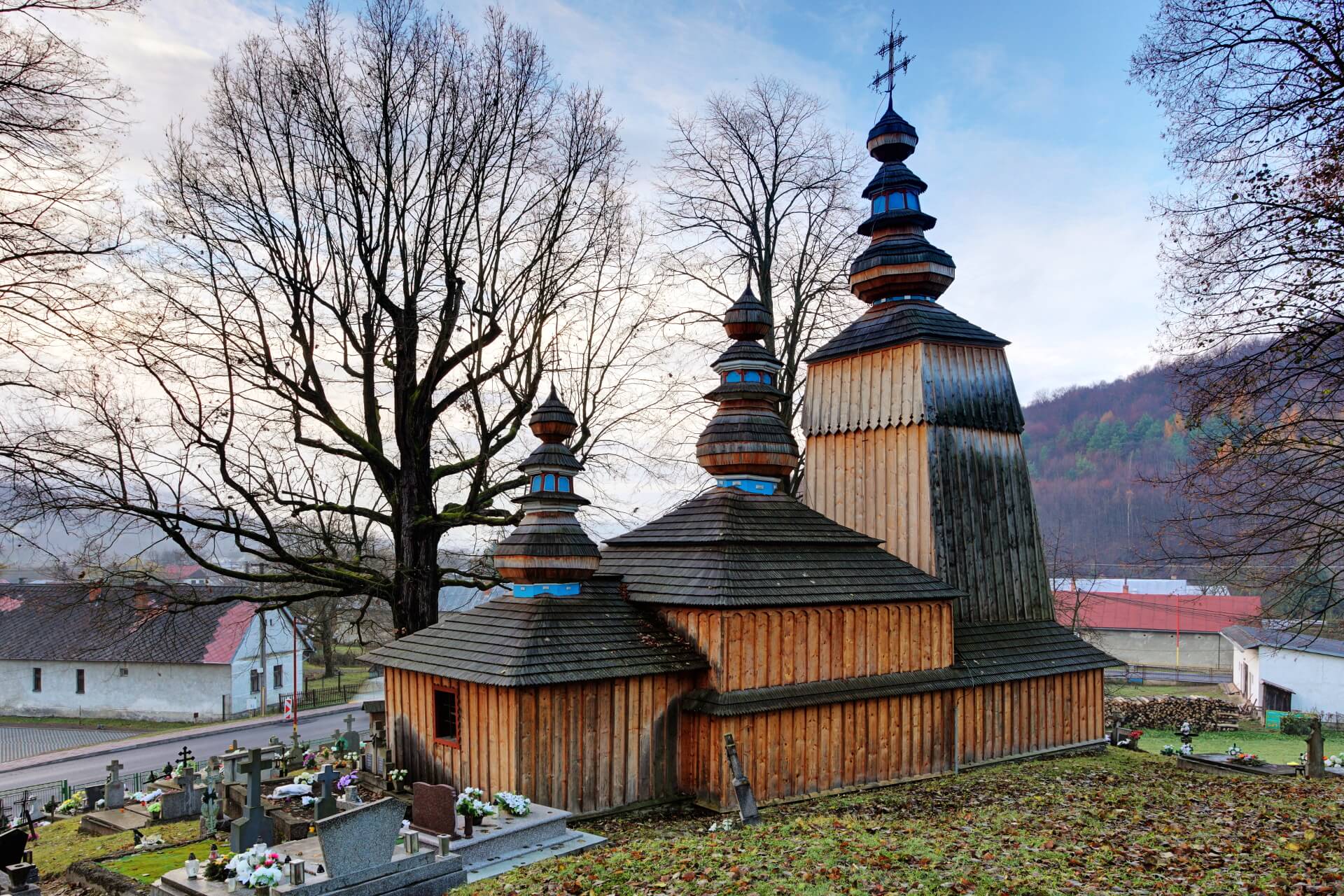 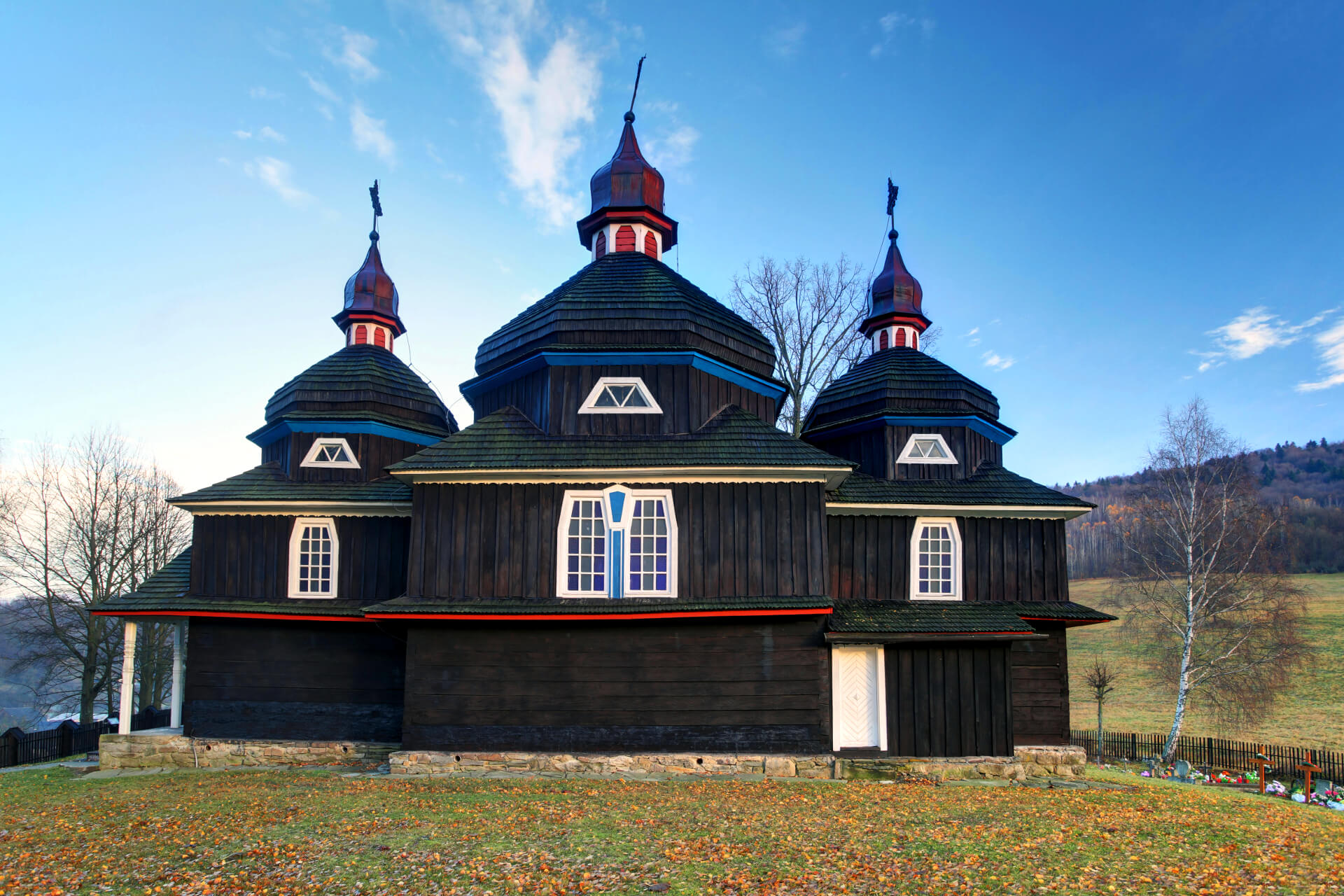 They represent a symbiosis of Christianity and folk architecture enhanced by the professional mastership of makers, including their basic cultural and aesthetic postulates. Evangelical churches serve also as an exceptional example of a tolerance in the Habsburg monarchy in the Upper Hungary during the period of the antireform movement and bloody anti-Habsburgs rebellions and uprisings over the 17th century. 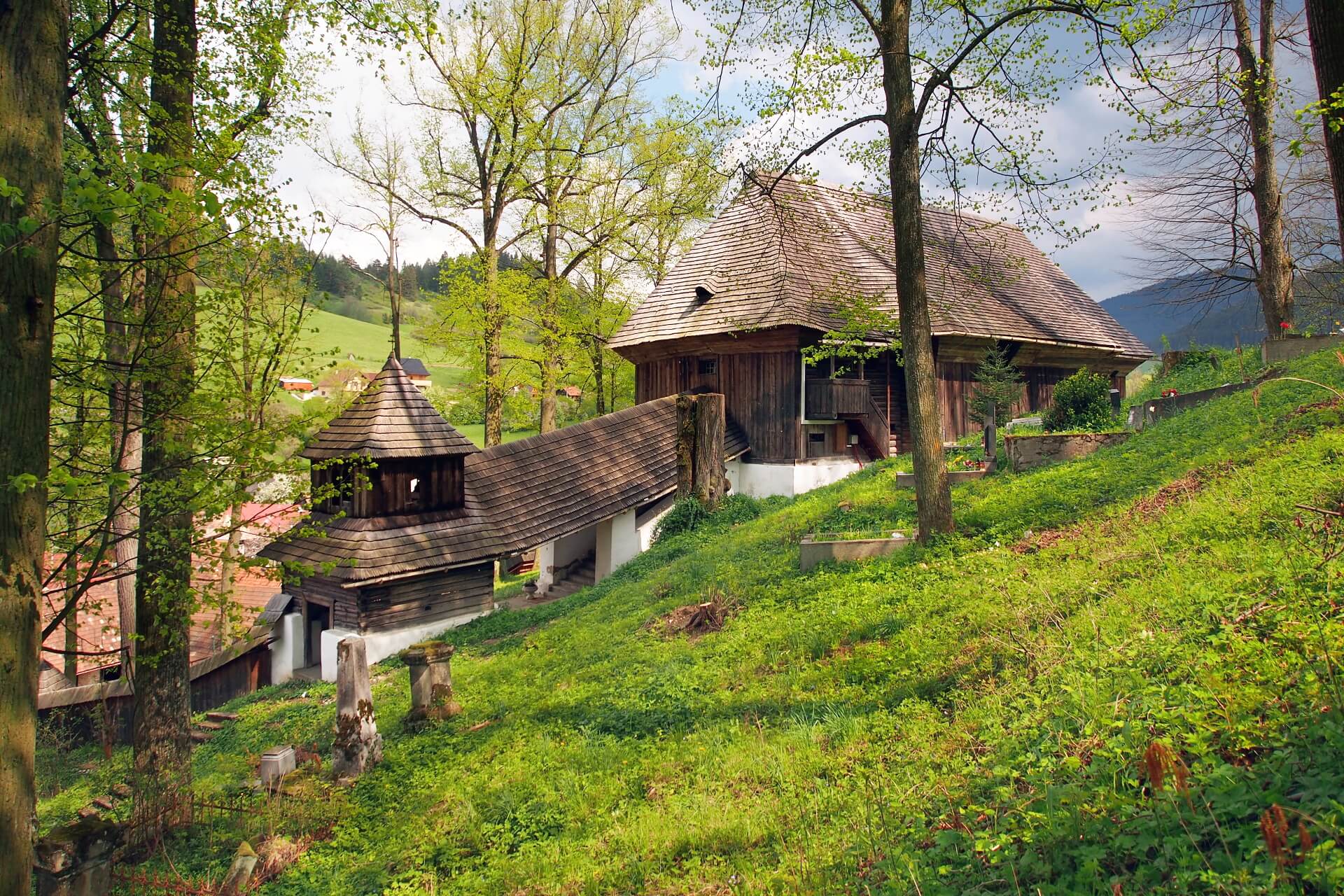 The oldest wooden churches from the 15th and 16th centuries followed the Gothic architecture style. They often stood in an elevated place, in the middle of cemeteries, enclosed by a stone or wooden fence. 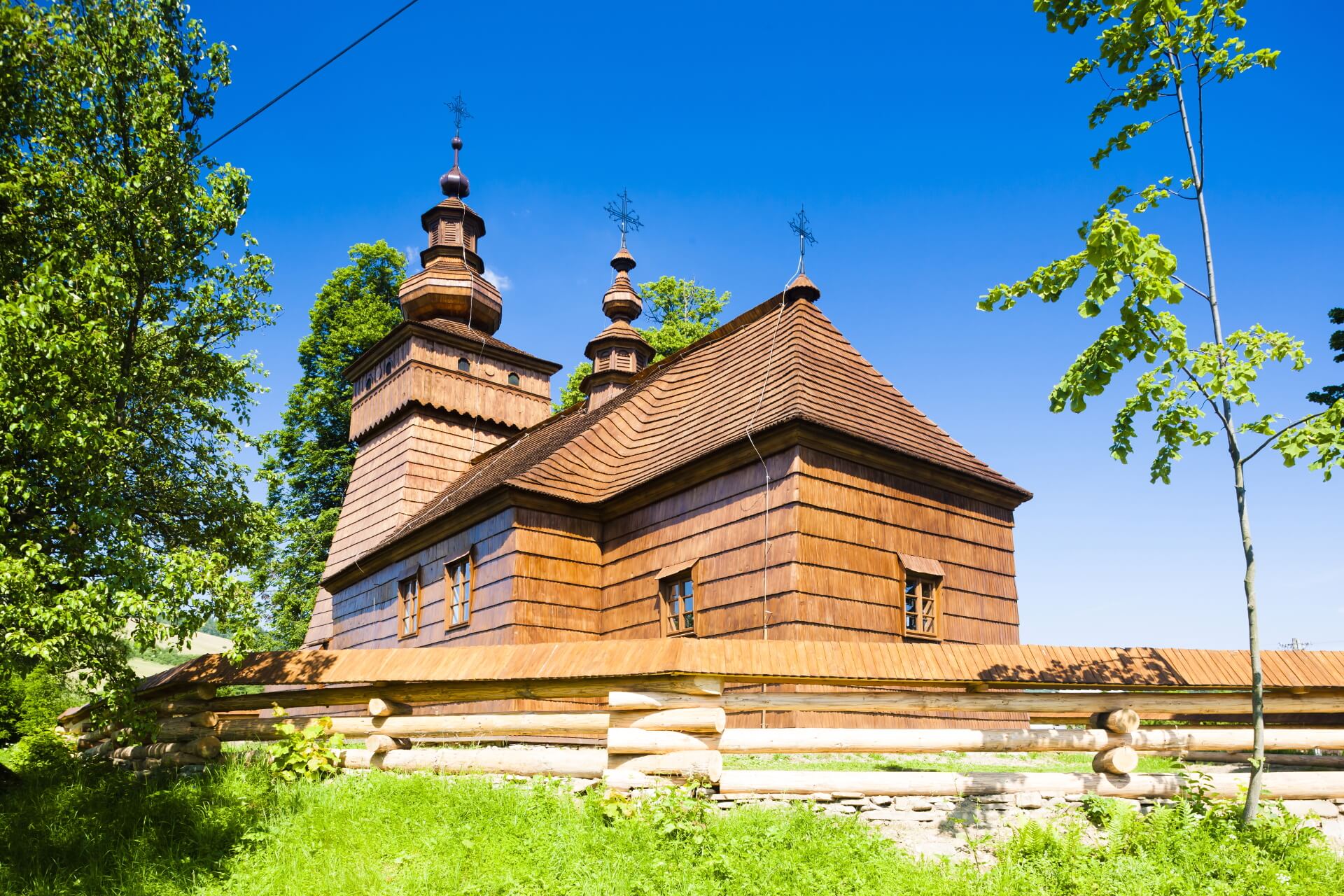 Oldest ones are Roman catholic Gothic structures built as wood version of stone structures of the same period. The builders used wood because ot was available, affordable and local craftsmen knew how to work with it. Two of these 500-old structures in Hervartov and Tvrdošín have made it to the UNESCO World Heritage List. 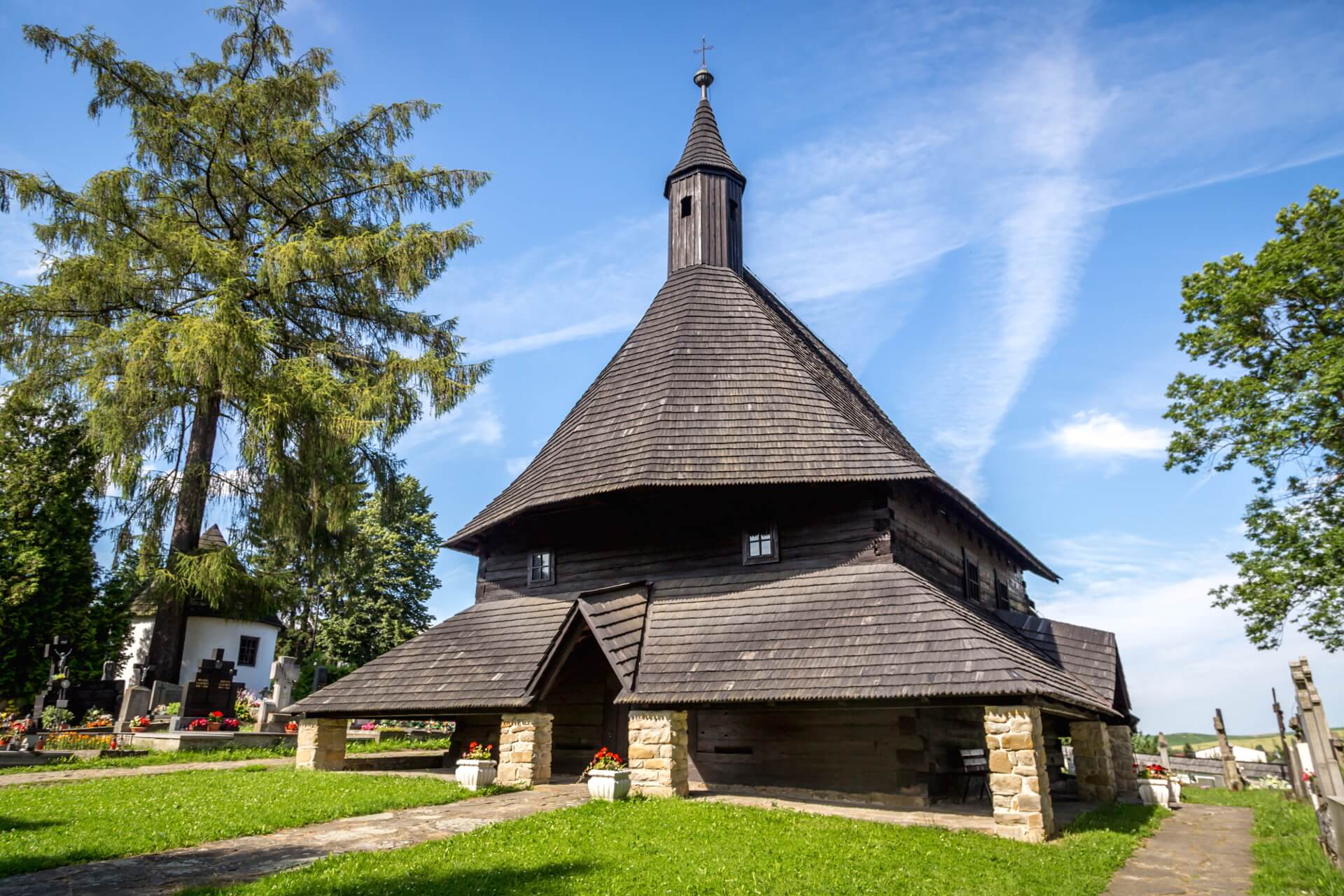 The spreading of Protestant ideas during the 17th century led to churches having to be built according to secular rules and limitations. This accounts for their austere appearance. Wooden churches built in the 17th century were long structures. This changed in the 18th century when construction according to a symmetrical cross design became typical. 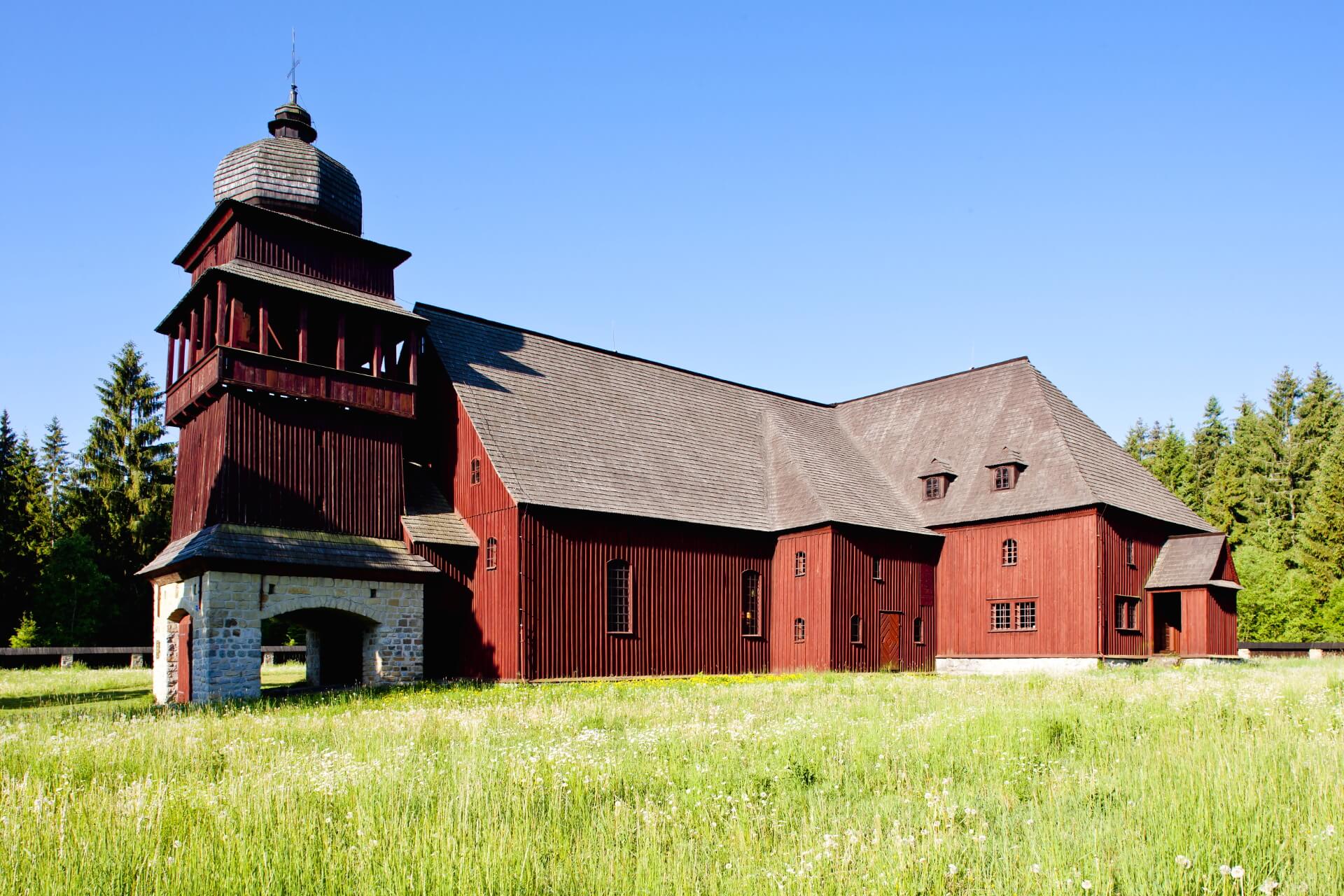 The reformers' churches could only be made of wood, have minimal foundations, and use no nails in their construction. They needed to be built within one year and situated outside the town gates. Decisions made to meet such chalenges led to a very distinctive style. Builders used ingenious carpentry techniques for joining together pieces of wood to create these lovely churches that have more in commmon with sculptures than buildings. 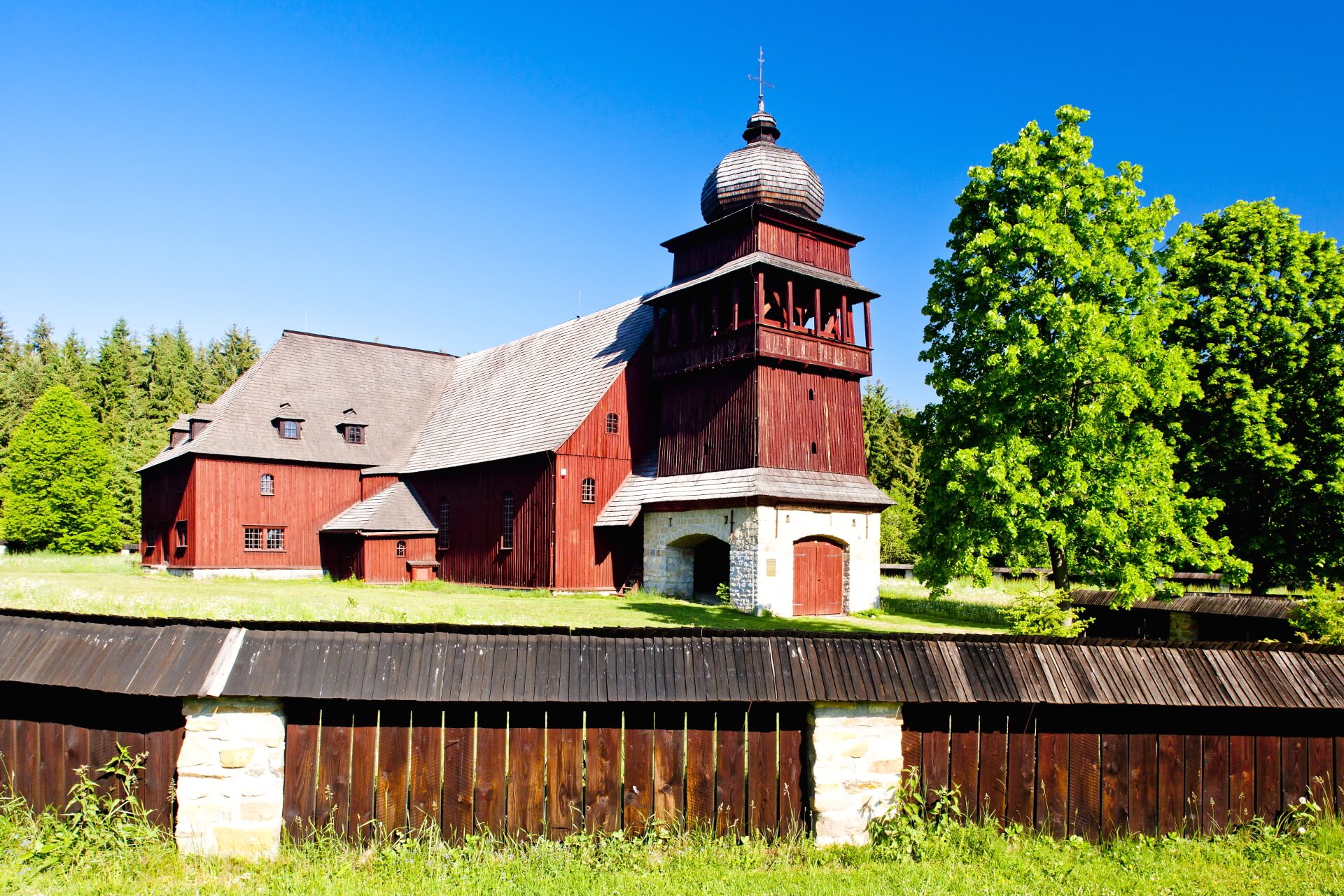 In the first half of 18. century, 38 Lutheran wooden churches were built, five of which survive today. These church buildings are miracles of architectural design and brilliant craftmanship. Three of them are included in the UNESCO World Heritage List and can be found in Kežmarok, Hronsek and Leštiny. All are still in use as sacral buildings. 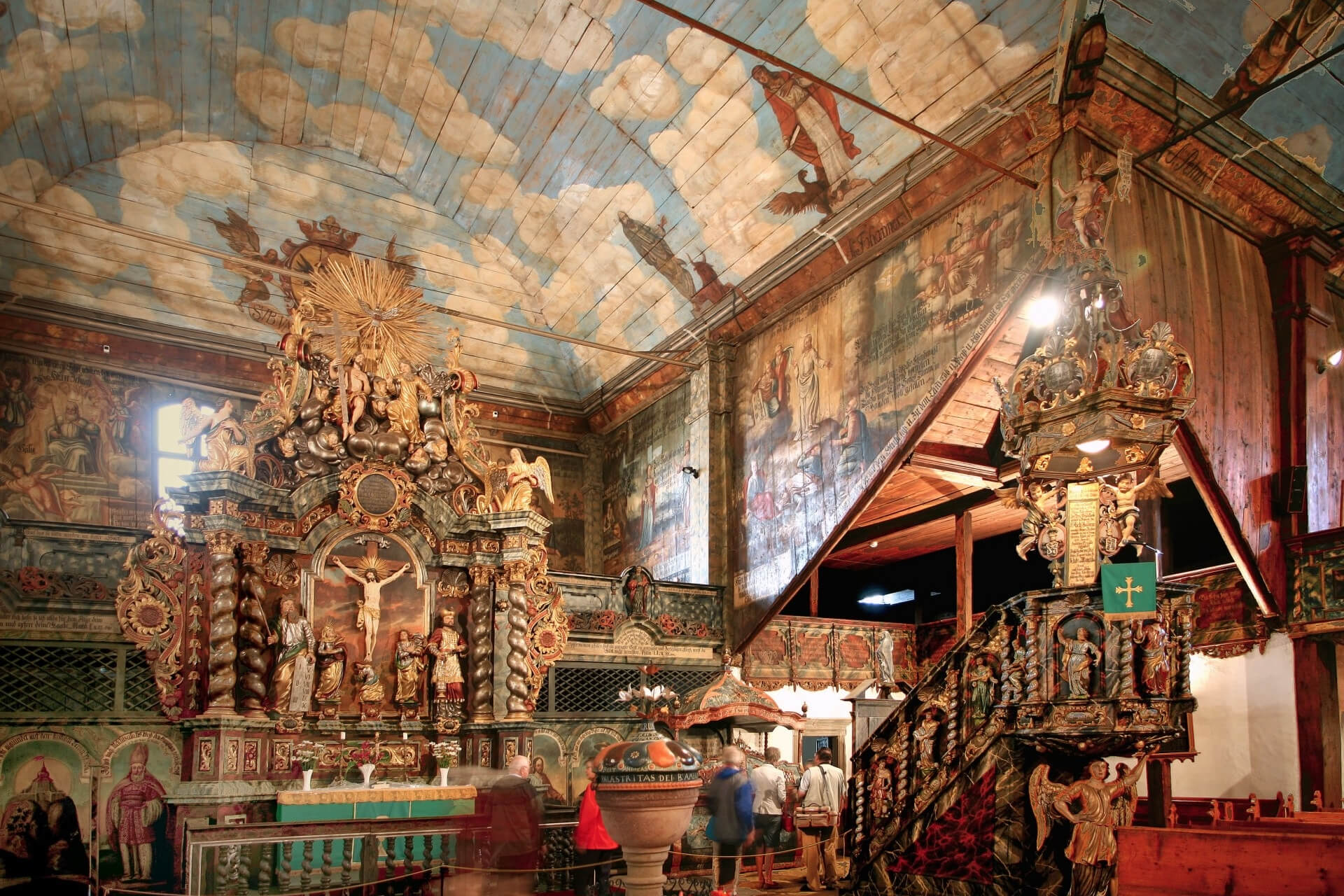 The wooden churches of the Greek Catholic and Orthodox Churches are characterized by their tripartite exterior and interior divisions and onion-shaped cupolas and towers, often with decorative crosses. Their wooden shingles covered roofs seem to ripple and flow like a snakeskin. A wooden screen dividing the church nave and sanctuary - an iconostasis - featured decorations of intricately painted icons. 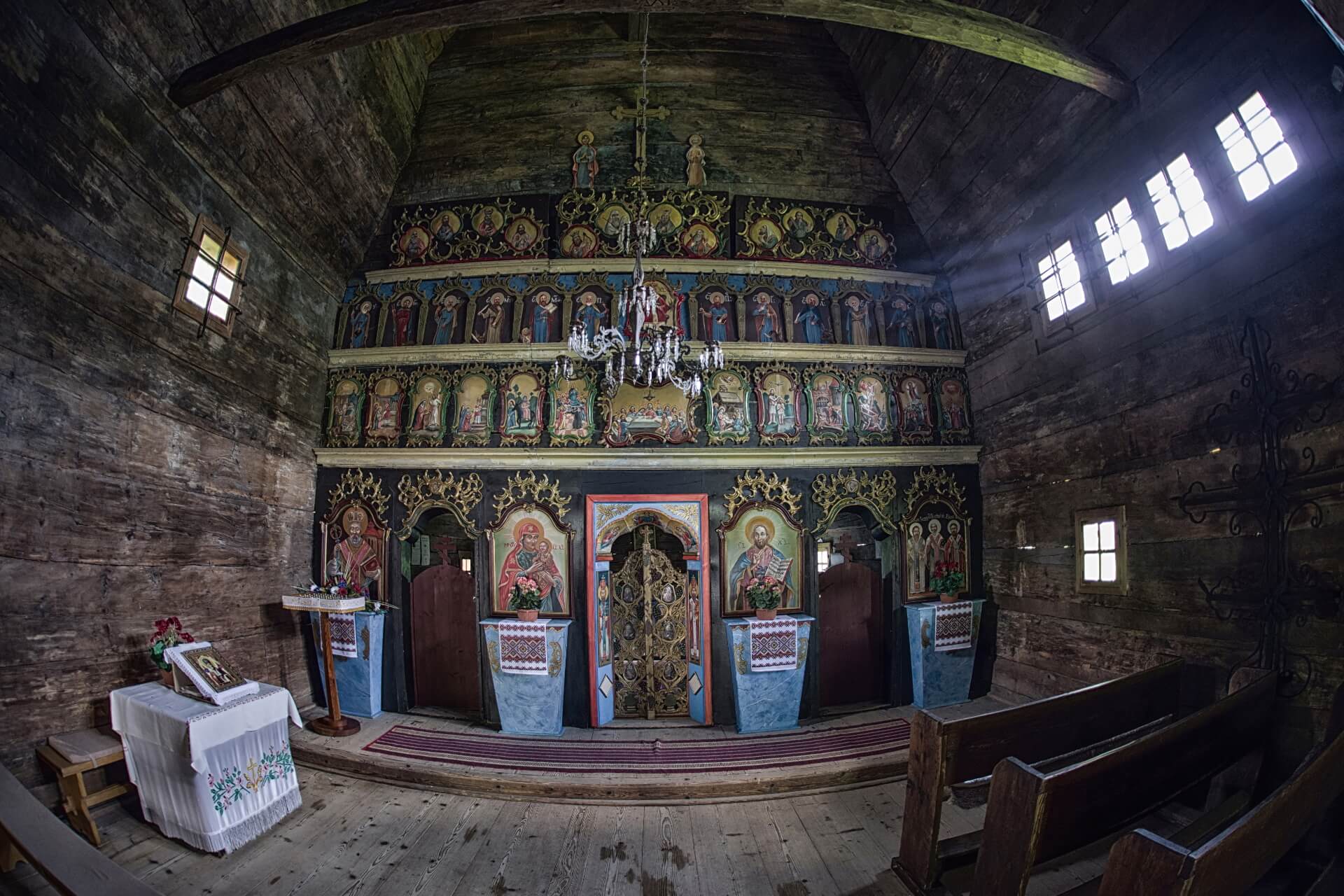 Most of the Greek Catholic churches are in Prešov and partly in Košice regions. Three are included in the UNESCO World Heritage List. These can be found in Bodružal, Ladomírová and Ruská Bystrá. 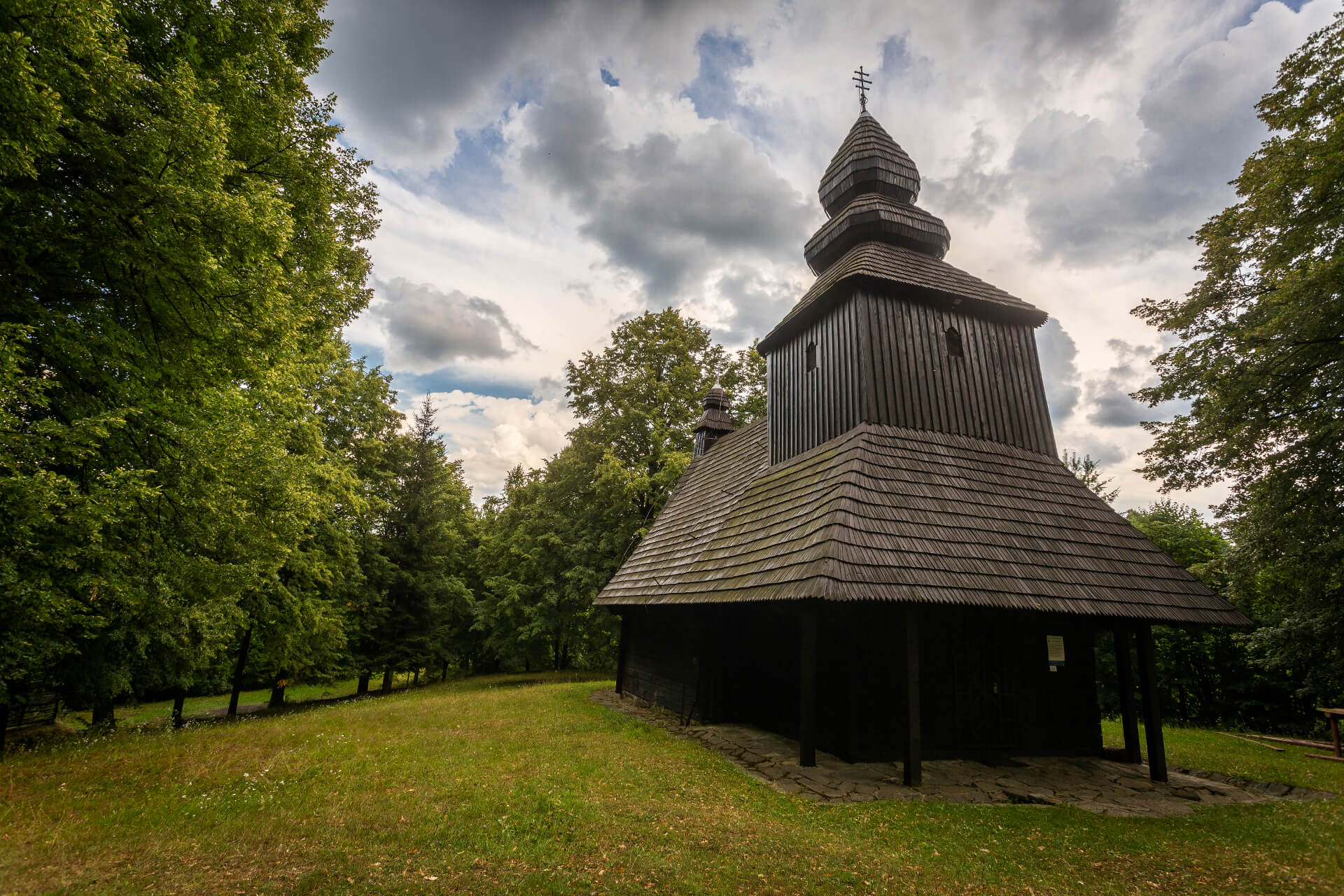 Greek Catholic wooden churches are thanks to beautifully crafted buildings and priceless art worthy tourist destinations with an experience of the sacral setting as a surplus value. These churches are small, intimate, ancient and undeniably spiritual and for many, an experience never to be forgotten. 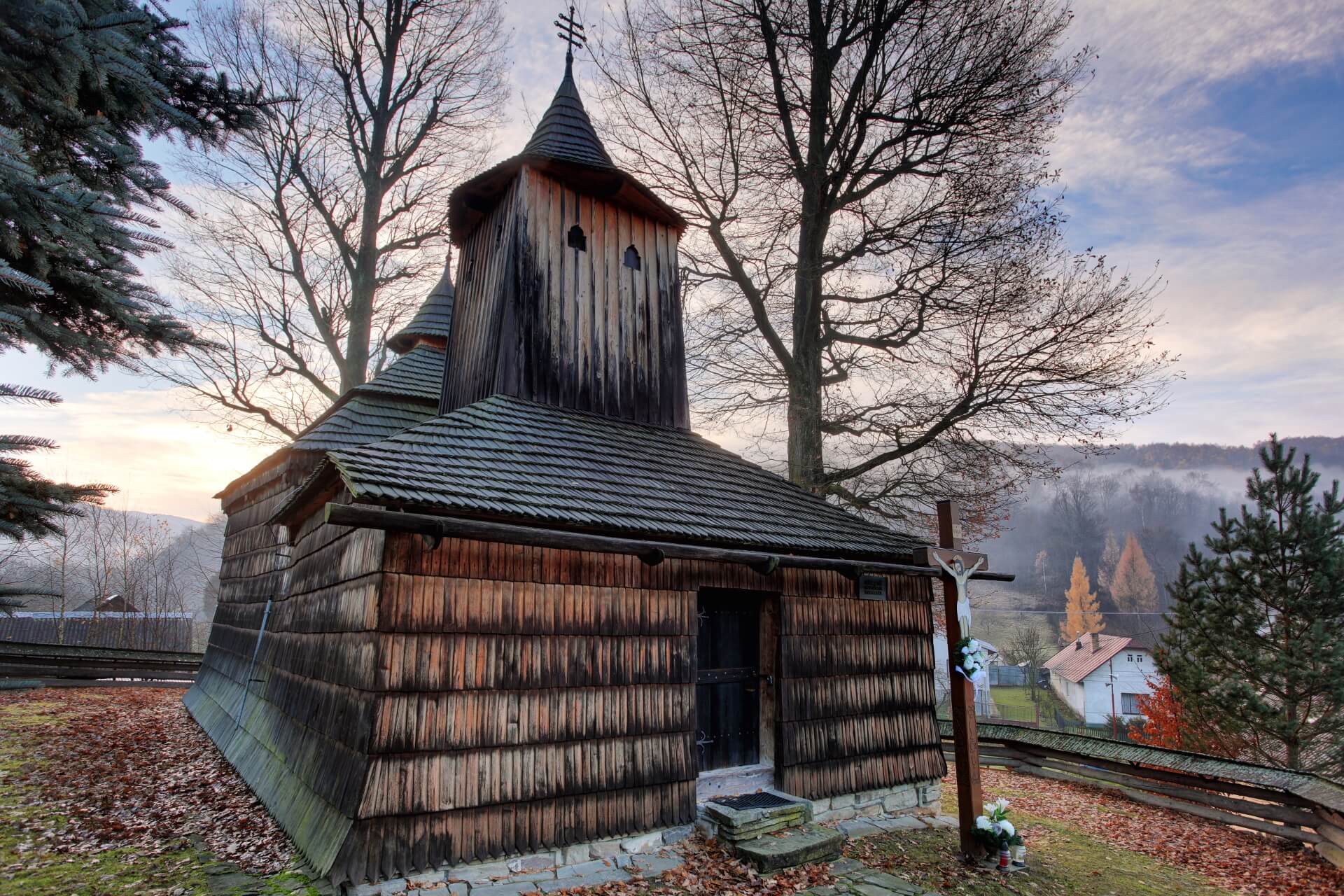 Most of them in quite isolated villages, wooden churches of the north-western Carpathians region are an evidence of the architecture and art development in the time of their origin and they are adjusted to the geographical and cultural context. 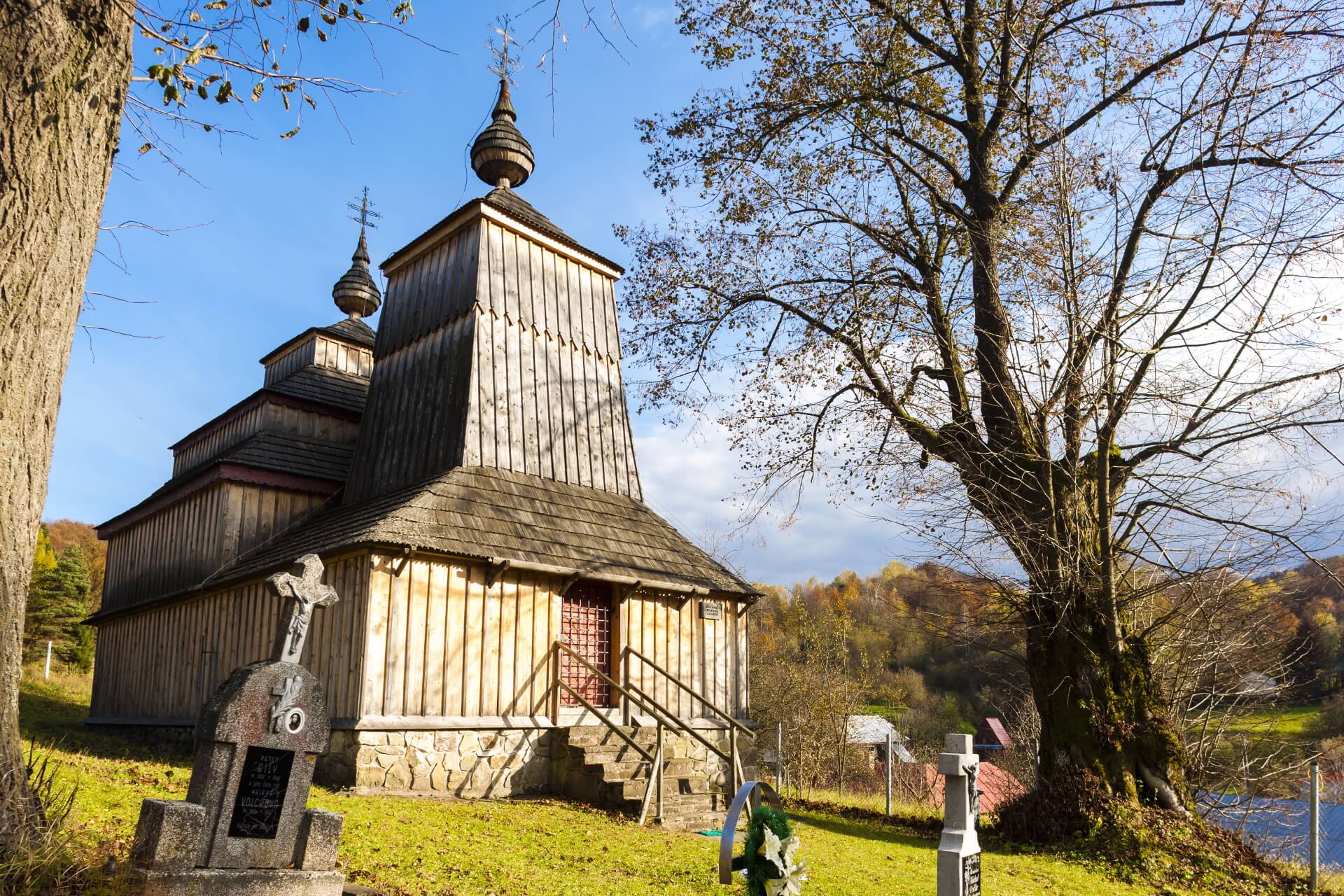 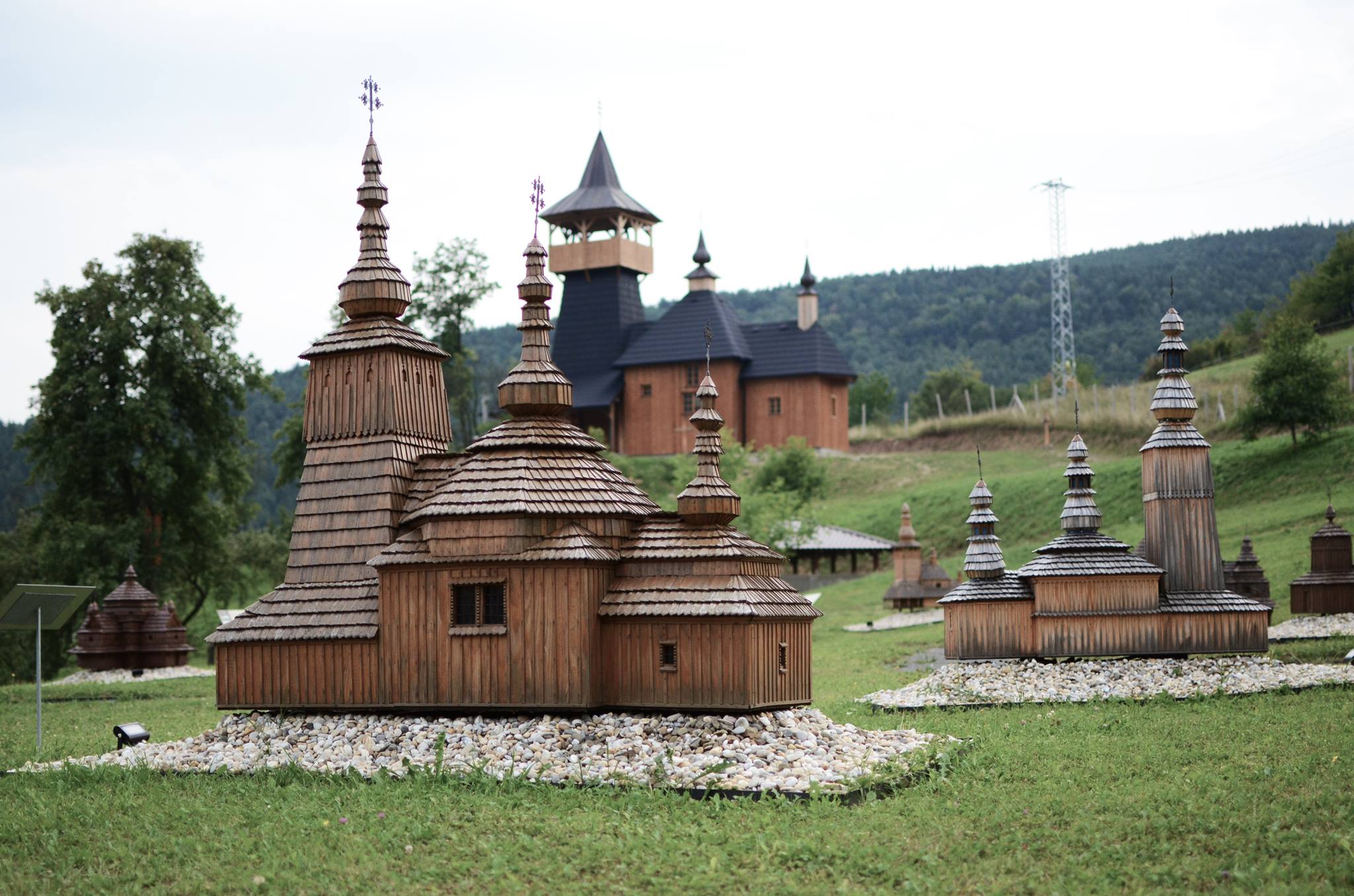 The sacral wooden architecture of the Carpathian basin is one of the most valuable pieces of European cultural heritage. Despite many traditional churches, temples and belfries were pulled down and replaced by modern ecclesiastical structures, dozens have been preserved. In the past, almost every village in the Carpathian region used to have its own church. They were built of the same material as other buildings in the village - the wood. 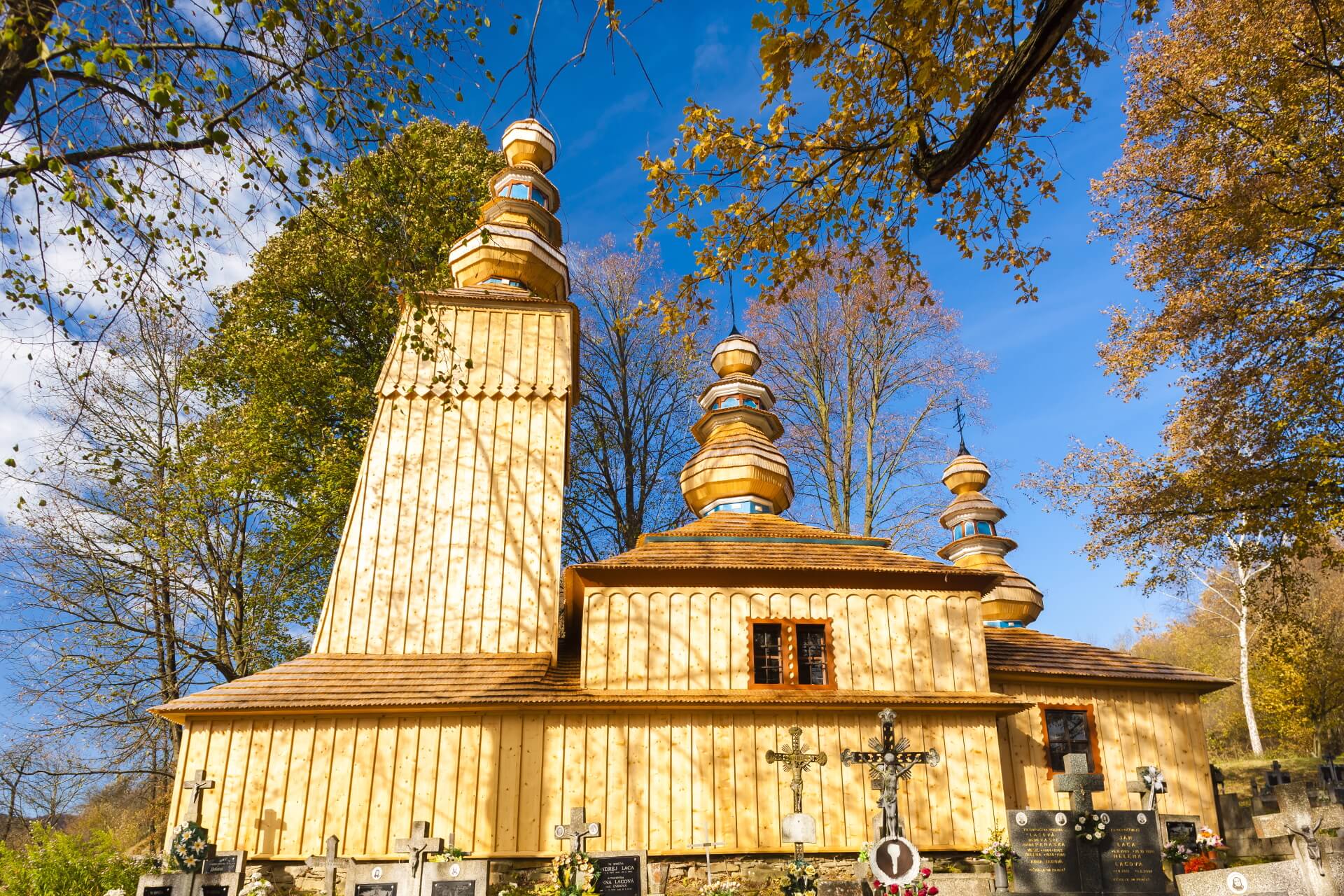 The one they used for these sacred buildings was soft and pliable, mainly red spruce though sometimes fir and yew. Oak and beech were used for belfries. Unsung local carpenters applied all the skills and knowledge acquired from their forefathers to build the churches. 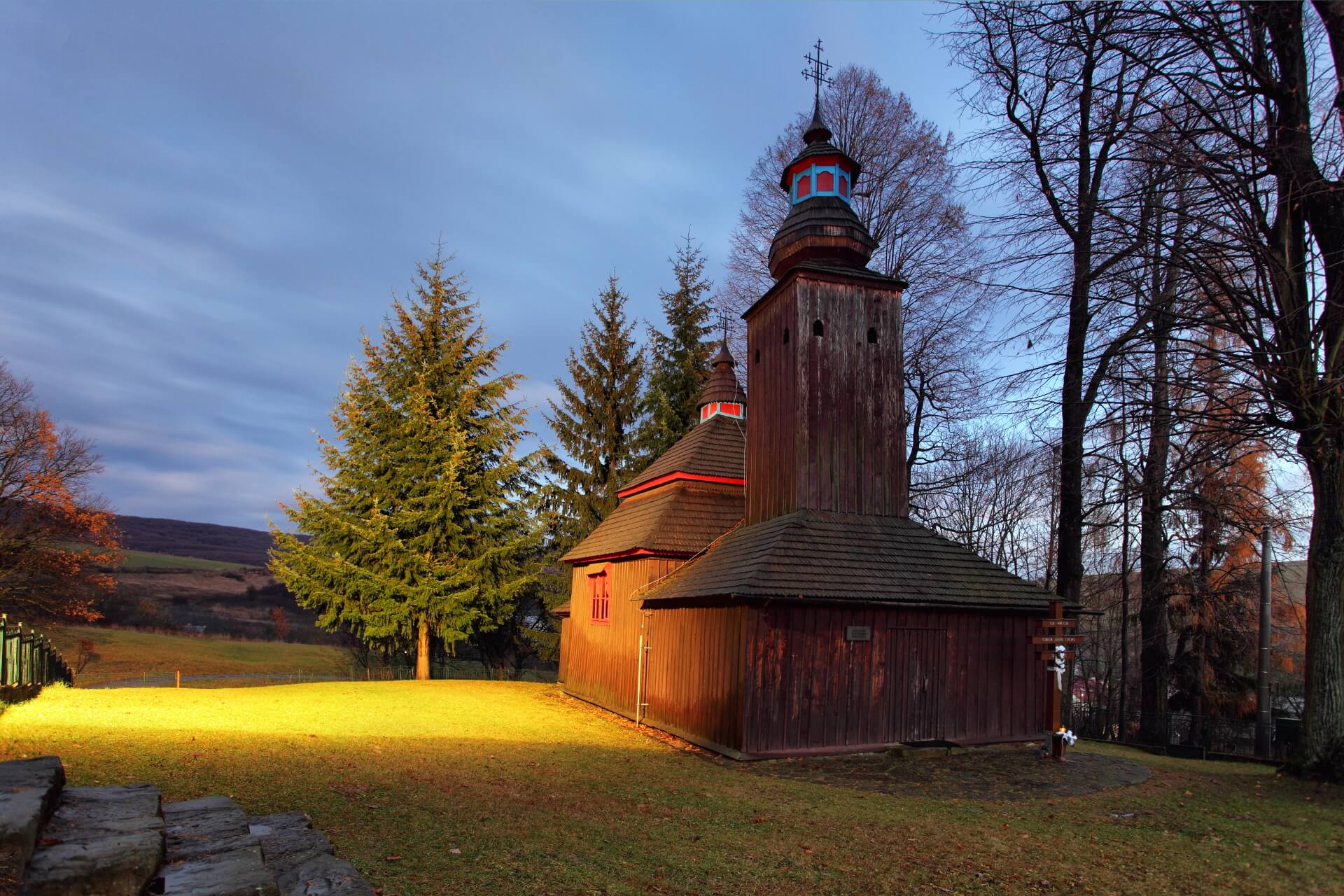 These churches present good examples of a rich local tradition of religious architecture, marked by the meeting of Latin and Byzantine cultures. Local woodcarvers used affluence of wood in poor regions for building sacral constructions. 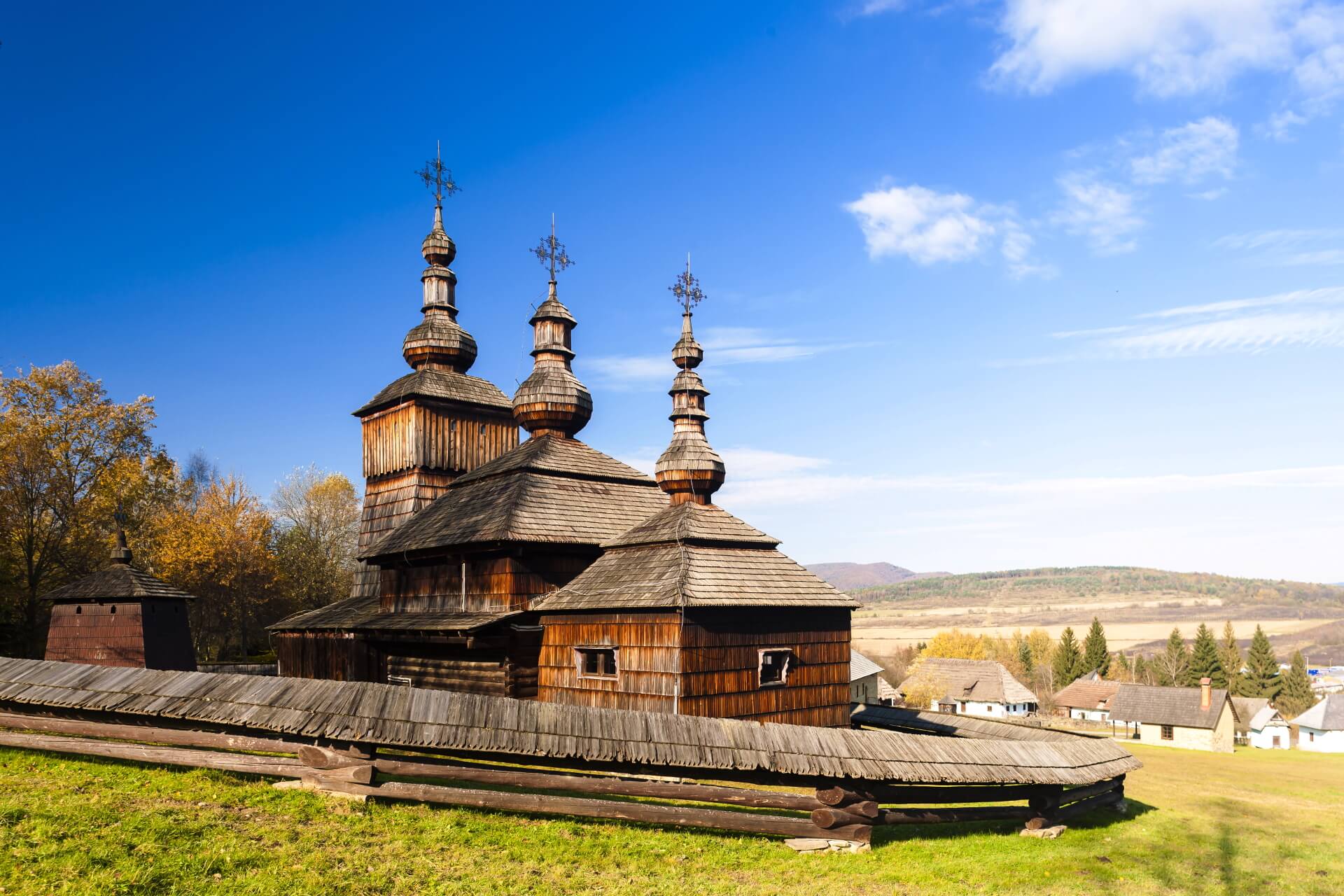 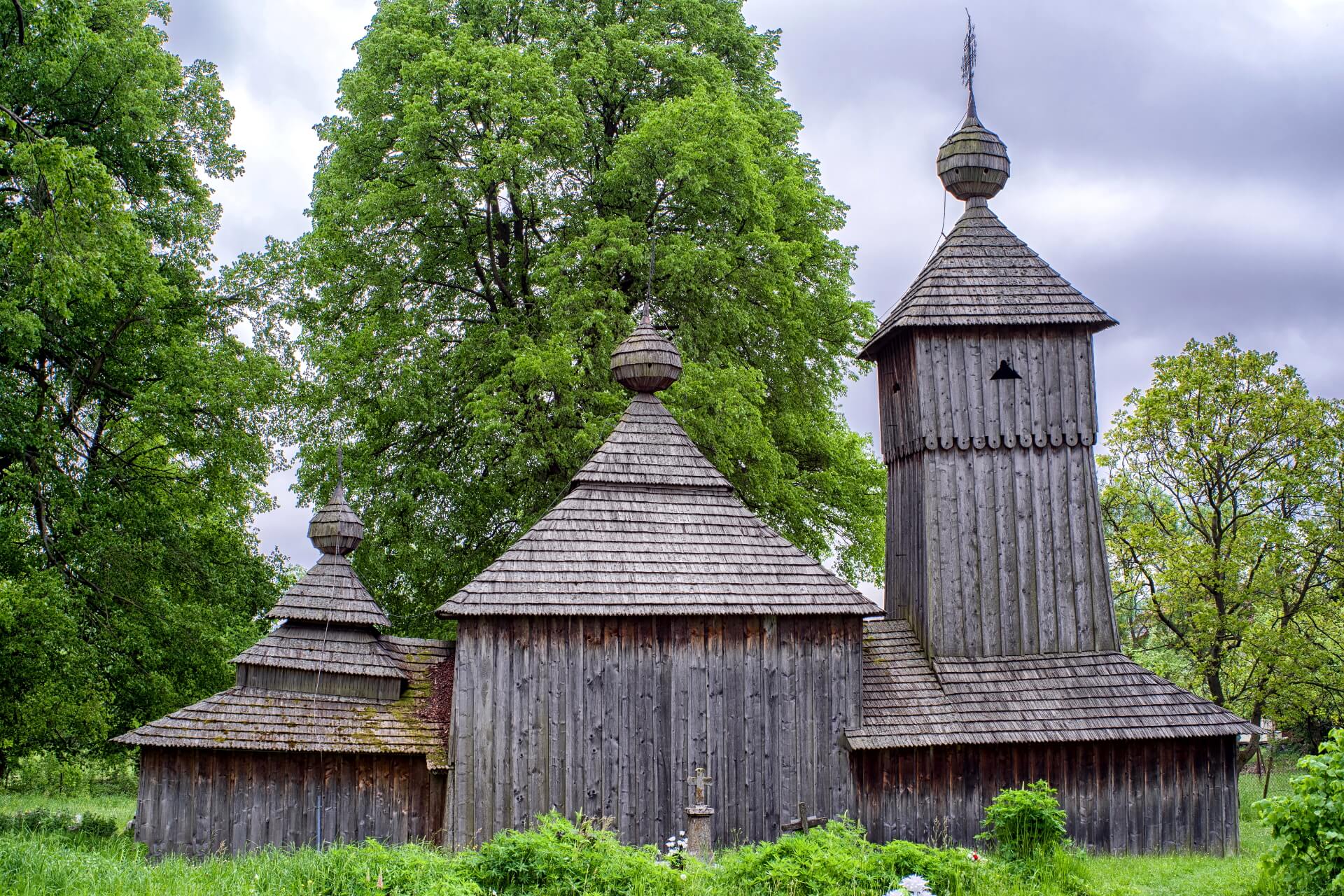 Interiors are decorated with paintings on the walls and ceilings and other works of art that enrich the cultural significance of the properties. 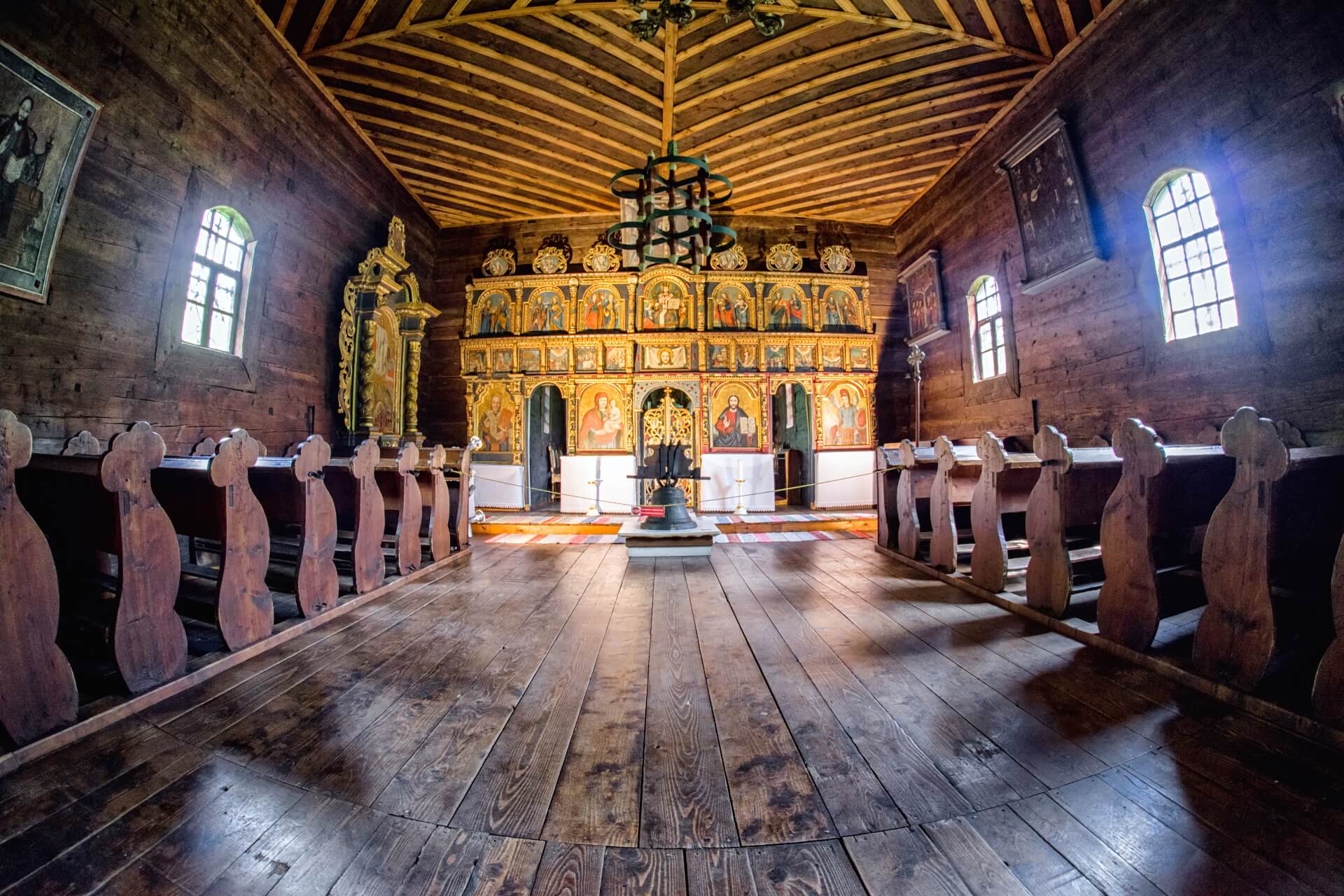 The genius loci of the eastern Slovak sacred buildings dwells also in another aspect, namely the human dimension of the wooden heritage. 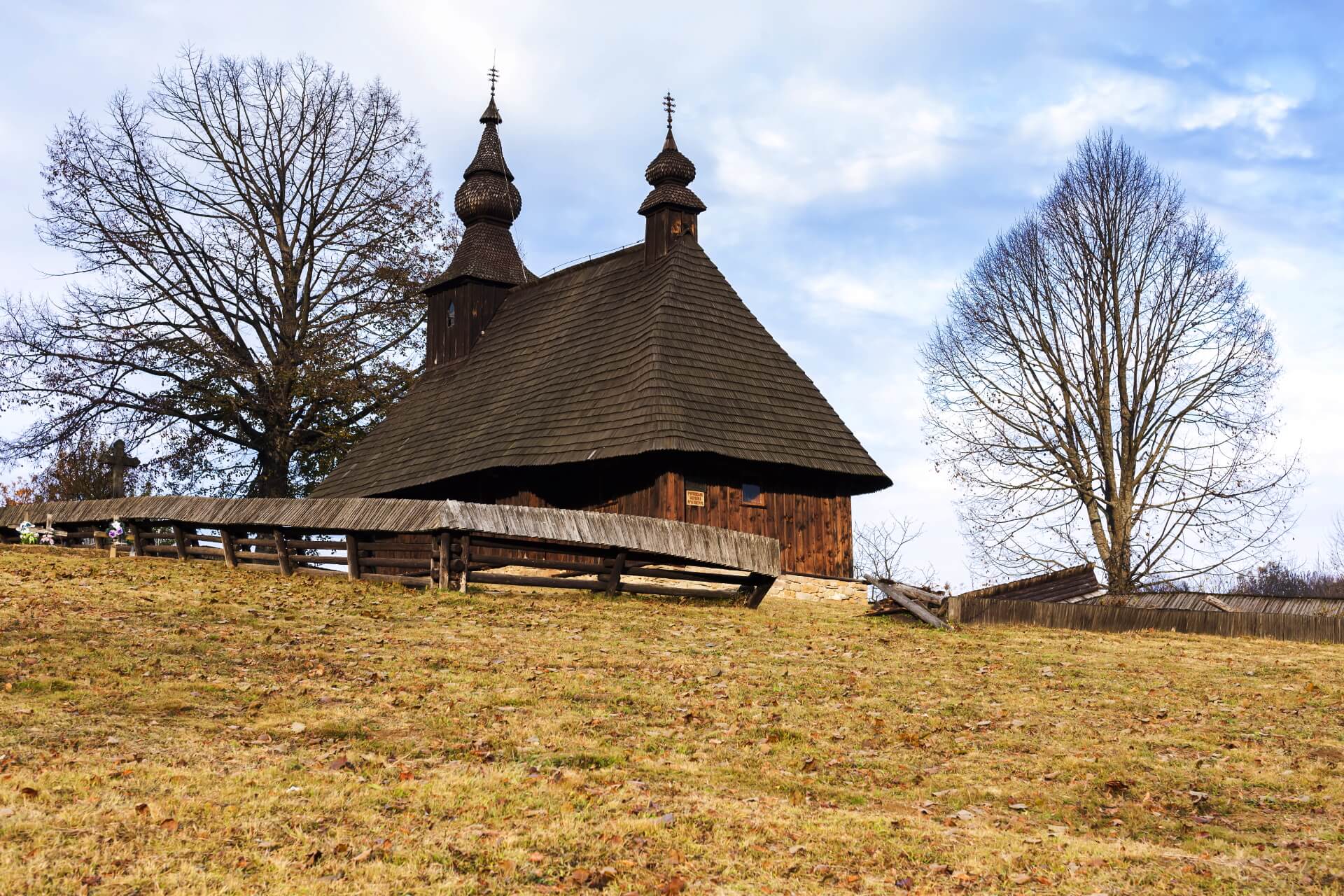 These sanctuaries were built by simple villagers, who often could not read or write, but knew perfectly well how to treat wood. Having a sort of natural sense of harmony, they literally felt which hill or meadow would be the best place for their church, though they probably were not capable of explaining it. 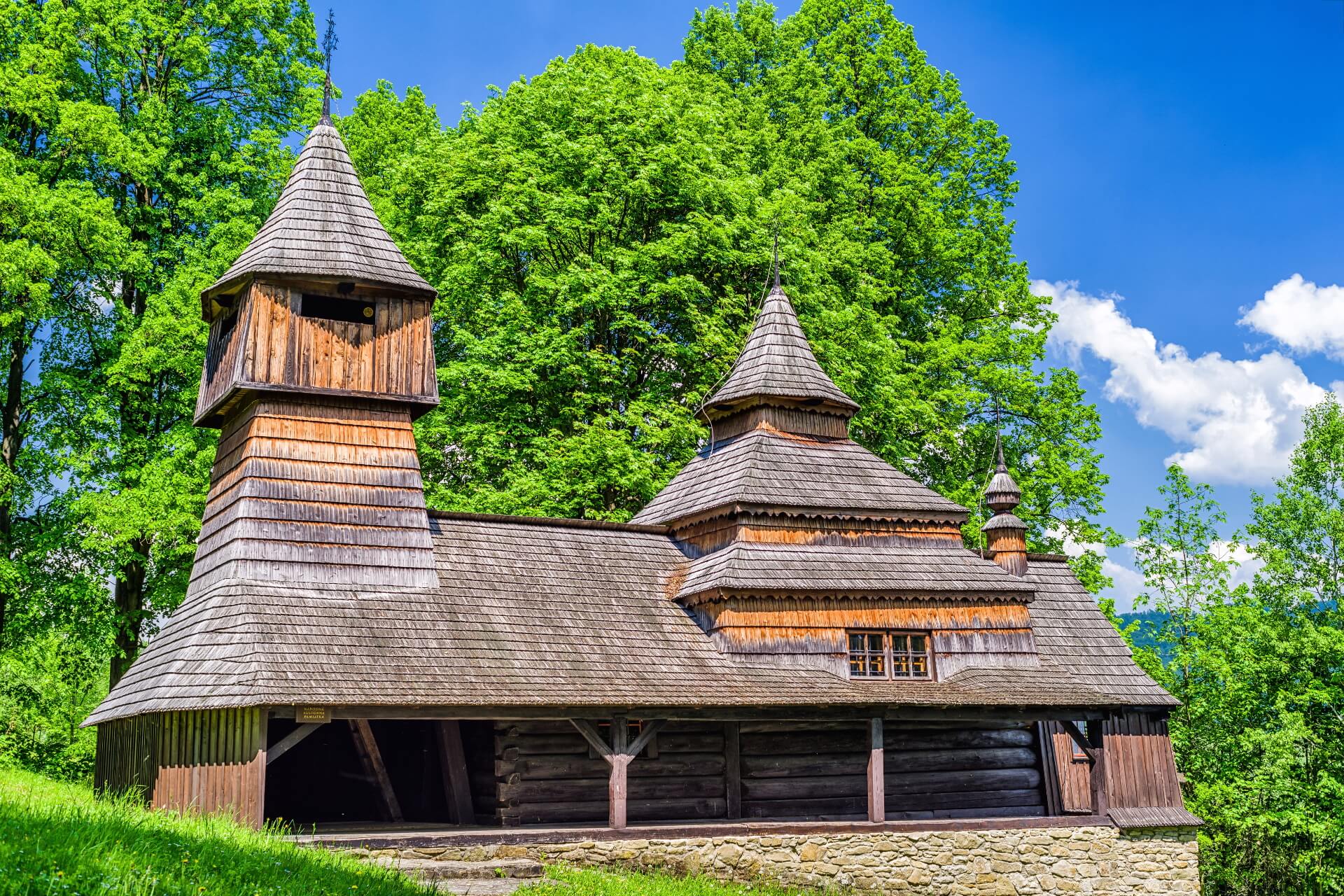 As a result, the ambience of these buildings cannot be understood without seeing their surroundings and the people praying inside. 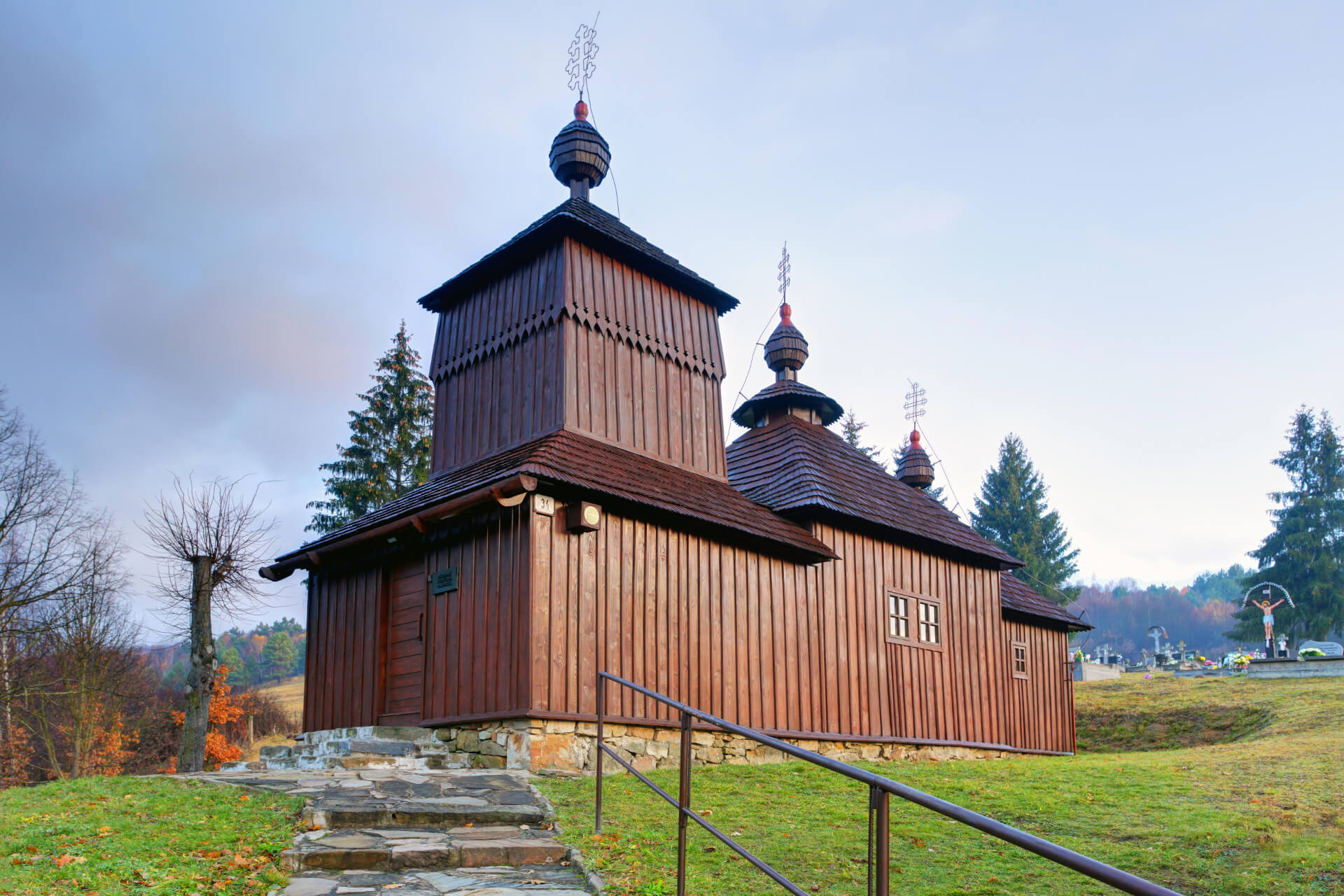 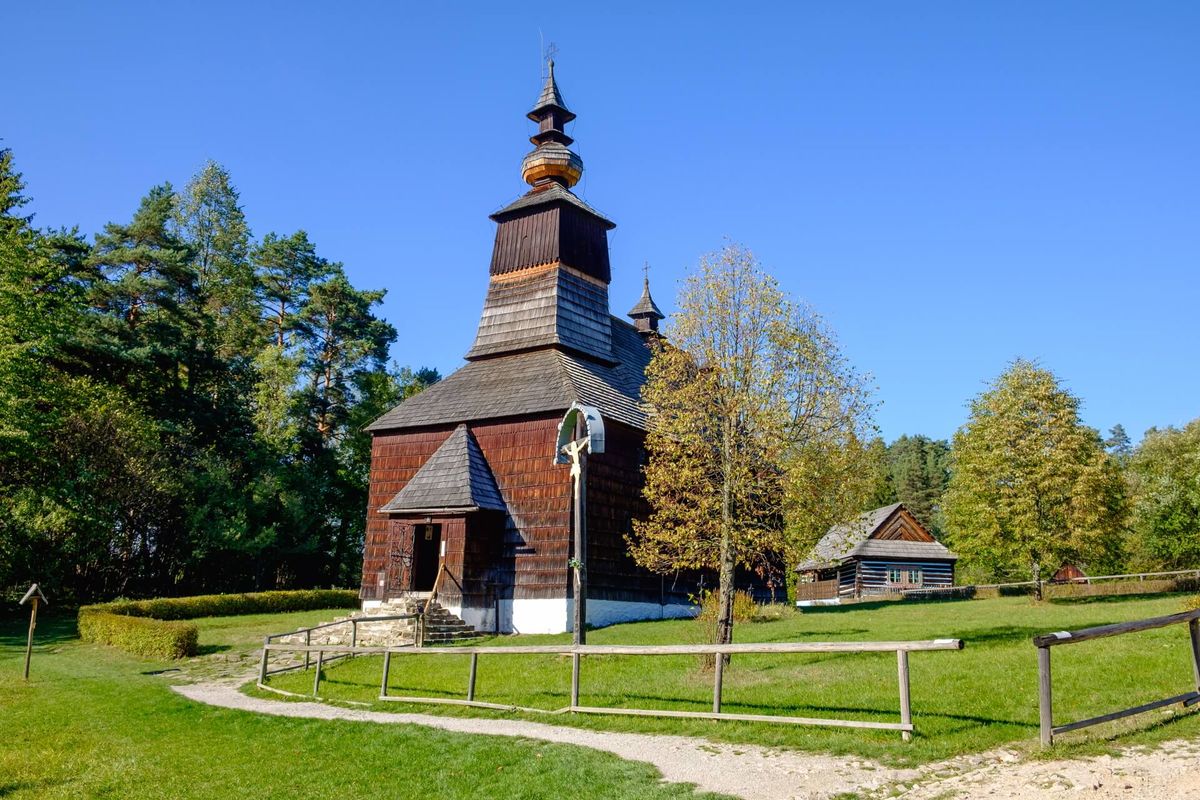 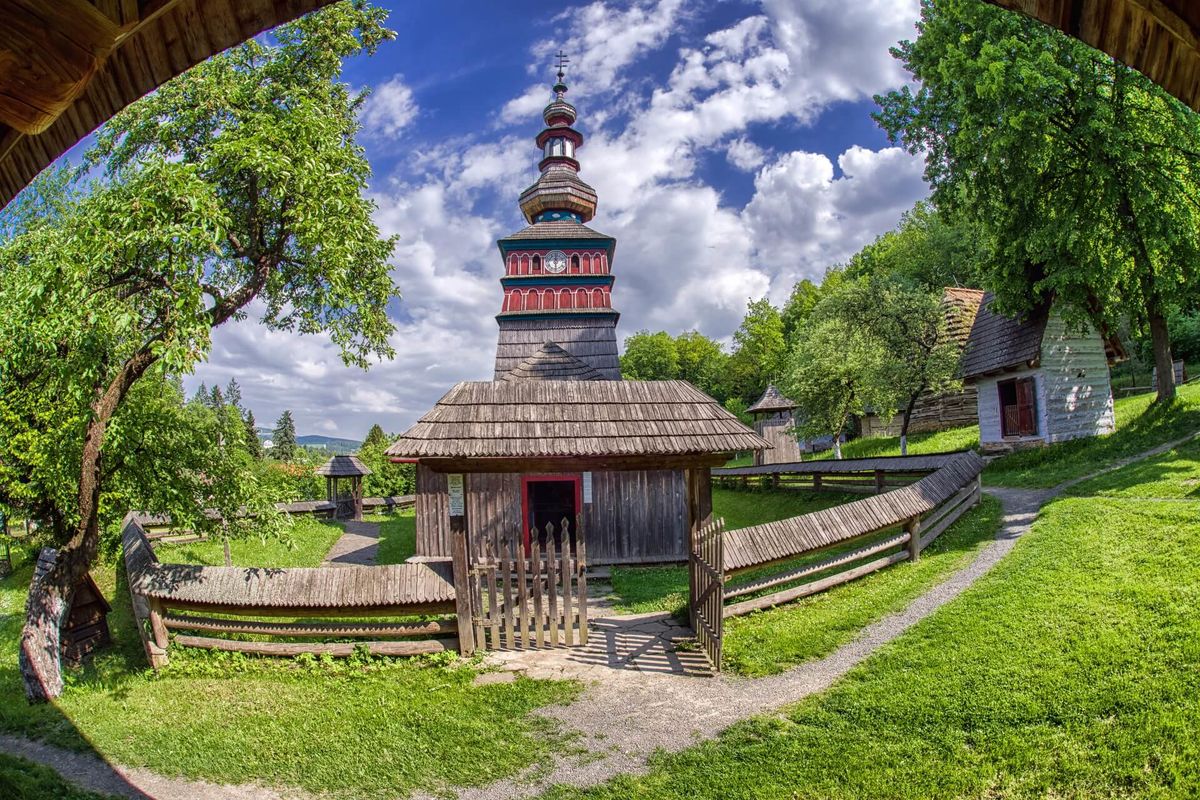