The pride of every Christian city is its parish church. This is undoubtedly the case with St Martins Minster, Bratislavas biggest, oldest, and most spectacular church.

First the Popes approval was needed to move the provosts church dedicated to the Most Holy Saviour from the castle into the settlement below the castle.  Pope Innocent III approved the request of the King Emerich of Hungary. Reconstruction, which was carried out in the 14th century under the patronage of the ruler and the town council, was in the Gothic taste.

St Martins Minster was a coronation church in the years 1563-1830. The first ruler to be crowned here was Maximillian II. The coronation ceremony took place on September 8th 1563. It was followed by eighteen other coronations including that of Maria Theresa on June 25th 1741. The last king who received St Stephens royal crown below the lead statue of St Martin was Ferdinand V on September 28th 1830. An incomplete list of eleven kings and eight royal spouses crowned in Pressburgs Minster is on the board placed on the inside northern wall. Every year coronation of one of the Kings is simulated in time of popular coronation feasts.

Reconstruction in the Baroque taste first concentrated on the interior and later on the construction of the fourth chapel. In the years 1732-1734 the ground plan of the church was widened by the chapel of St John the Almsgiver one of the most valuable artistic monuments of Bratislava. The Baroque chapel was probably built according to the George Raphael Donners design. The recognized artist Georg Rafael Donner was entrusted with more works in the interior of the church. The new bulky Baroque altar with Donners monumental group of statues of St Martin replaced the removed Gothic one. This wonderful sculpture made in 1744 from lead represents a Roman soldier from Transdanubian Pannonia, who cuts his cape in two in a mighty movement of sabre to give half of it to a beggar suffering from cold.

The Baroque tower was destroyed by fire caused by lightning in 1833. It was only three years after the last coronation was held in the Minster. Reconstruction was entrusted to an important Pressburg Classicist architect Ignác Feigler senior. He chose the fashionable romanticizing style. The tower was given the Neo Gothic face, which has survived until today. The tower of the Minster is 85 metres tall. At its top is a gilded 2x2 m cushion bearing the copy of the Hungarian royal crown. The imitation is one metre tall and weighs 300 kilograms. The tower contains two bells; the bigger of them is called Wedderin. 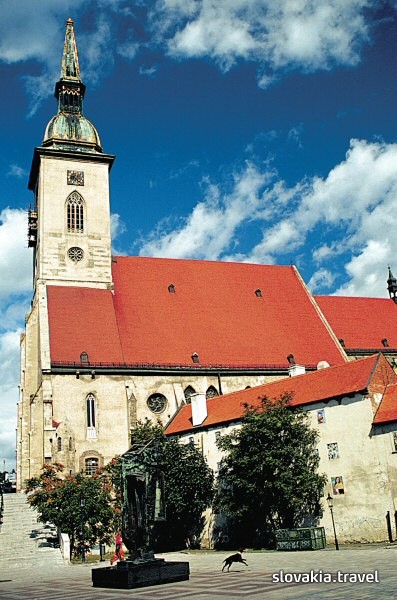