In the Streets of Bratislava's Old Town

The centre of Bratislava is also called the Old Town (41,953 inhabitants). The Old Town includes the historic centre and adjoining neighbourhoods that used to be the centre's immediate outskirts in the Middle Ages.

St. Michael's Tower is one of essential symbols of Bratislava. Only the gate on St. Michael's Tower has been preserved out of the original four gates that were gateways for entering the fortified medieval city. Currentlyan exhibition of weaponry and city fortifications of the Bratislava City Museum is on display in the tower. A zero kilometre, which counts the distance of selected cities in the world from Bratislava, is located under the tower. A view of the entire rest of St. Michael's Street (Michalská ulica), which is one of the oldest in the city, opens up from St. Michael's Gate.

Zichy's Palace (house No. 11) with its elegant, strictly Classicist-style facade draws the visitor's interest at the corner of Ventúrska and Prepoštská Streets. It was built in approximately 1775 at the behest of Count Francis Zichy. The palace was refurbished in the 1980's and now it hosts all kinds of ceremonies and celebrations. A Baroque-style Pállfy's Palace (house No. 10), which was rebuilt from an old house in 1747, is located at the corner of Ventúrska and Zelená Streets. A memorial plaque on the Pállfy's Palace facade on Ventúrska Street brings attention to the fact that the six-year old child prodigy, worldwide known as Wolfgang Amadeus Mozart (1756-1791), probably performed a concert in the palace.

The crossroads of the Fisherman's Gate and Panská and Laurinská Streets is one of the Old Town's liveliest places. People like to stop here to listen to tunes played by street musicians. Tourists are bound to make a picture with the statue of Čumil in what is an almost ceremonial photo session. The Fisherman's Gate is a short street in Bratislava's historic centre. Next to House No. 1 on Fisherman's Gate Street is a statue of a man in real size, who is holding a hat in his hand. The man looks like he is saying hello to somebody he knows coming out of a nearby entrance. Unlike the nearby Čumil, this sculpture, which shines in the silver colour, represents a real Bratislava local, whom everybody has called Schöner Náci.

Every building on the Main Square is worthy of attention.  The one that stands out most, though, is the square's main landmark – the Old Town Hall. The rebuilt Bratislava's Town Hall on the Main Square began to be fully used in 1434.  Prior to 1442, an underpass was built to enable entering the Town Hall from the Square. This remarkable architectural element has been preserved in all its beauty to this day. During subsequent construction work, just repair and reconstruction of some valuable architectural details was carried out. A plaque with a line marking the water level of the Danube River during disastrous floods in February 1850 is placed on the wall. An exposition of the history of the city and feudal justice of the Bratislava City Museum is on show in the Old Town Hall building.Of three central areas in Bratislava's historic centre, the Main Square, built in almost square dimensions, is the most enchanting place.  Throughout Bratislava's history it was the main market place, an area for public gatherings, welcoming ceremonies to sovereigns and other renowned personalities. The Main Square continues to lure visitors to have a rest near a Renaissance-style fountain, on a bench with the statue of a French soldier or under a sun umbrella in one of local cafés.

FRANCISCAN SQUARE
The Franciscan Square constitutes a kind of contrast to the lively Main Square. Visitors find here a substantially quieter, almost private place encircled by ancient historical buildings. Its name is derived from one of the oldest churches in Bratislava – the Franciscan Church with a monastery from the 13th century. Mirbach's Palace is an architectural landmark of the upper part of the Franciscan Square. Alongside the Primatial Palace, they are viewed as the most beautiful sights that Bratislava can offer to tourists.  The building was built in the Rococo style by M. Hörlligl between 1768 and 1770 on a lot where originally a house known as Weitenhof (Wide Yard) was located.  Count Emil Mirbach was the palace's last private owner. He donated it to the city on the condition that a gallery would be installed in the palace. The City Hall complied with this essential condition included in Mirbach's last will, while the palace houses the Bratislava City Gallery to this day.

PRIMATIAL SQUARE
The north-eastern part of Bratislava's historic centre has probably opened up the most to former outskirts, which then became the city's new centre. One of Bratislava's most beautiful squares, which is ruled by the "king" of Bratislava's palaces, is part of this area of  the Old Town. The vast Primatial Palace, which covers the entire southern part of the Primatial Square, is rightly considered to be one of the most beautiful palaces in Bratislava. It was built between 1778 and 1781 on the site of an old Archbishop palace. The front wing facing the Primatial Square features a strictly Classicist-style facade. A unique collection of sixBratislava's tapestries from the 17th century, which comes from England's Royal Manufacture in Mortlake, is there on display for the public.  The collection depicts a legend of a tragic love story. The collection is under the remit of the Bratislava City Gallery.

HODŽA'S SQUARE
The Presidential Palace is the main landmark of Hodža's Square.  It was built after 1760 as Anton Grassalkovich's garden palace with a decorative garden. Outside the palace is a memorial courtyard that is separated from the square by an impressive fence that features two gold-plated wrought-iron gates.

DANUBE'S LEFT EMBANKMENT
The area of Bratislava's embankment located between the historic centre and the Danube's left bank is a place that is ideal for a refreshing stroll, a visit to a museum or gallery, a drink in a café or restaurant pertaining to boatels anchored on the river. At the corner of Fajnorovo nábrežie and Vajanského nábrežie embankments is the Slovak National Museum. Currently an exposition of natural sciences of the Slovak National Museum is on show in the museum. Since 1965 a port called Danubius has been on the eastern side of Fajnorovo nábrežie embankment. It is used for sightseeing cruises along the Danube, with a trip to ruins of the Devín Castle being one of the most popular cruises.

HVIEZDOSLAV'S SQUARE
Hviezdoslav's Square is one of the city's most beautiful and liveliest squares. The building of the Slovak National Theatre (SND) is the most representative building on the square. The graceful, eclectic building of the theatre was built in 1886. The luxury hotel Carlton is also one of the square's symbols. 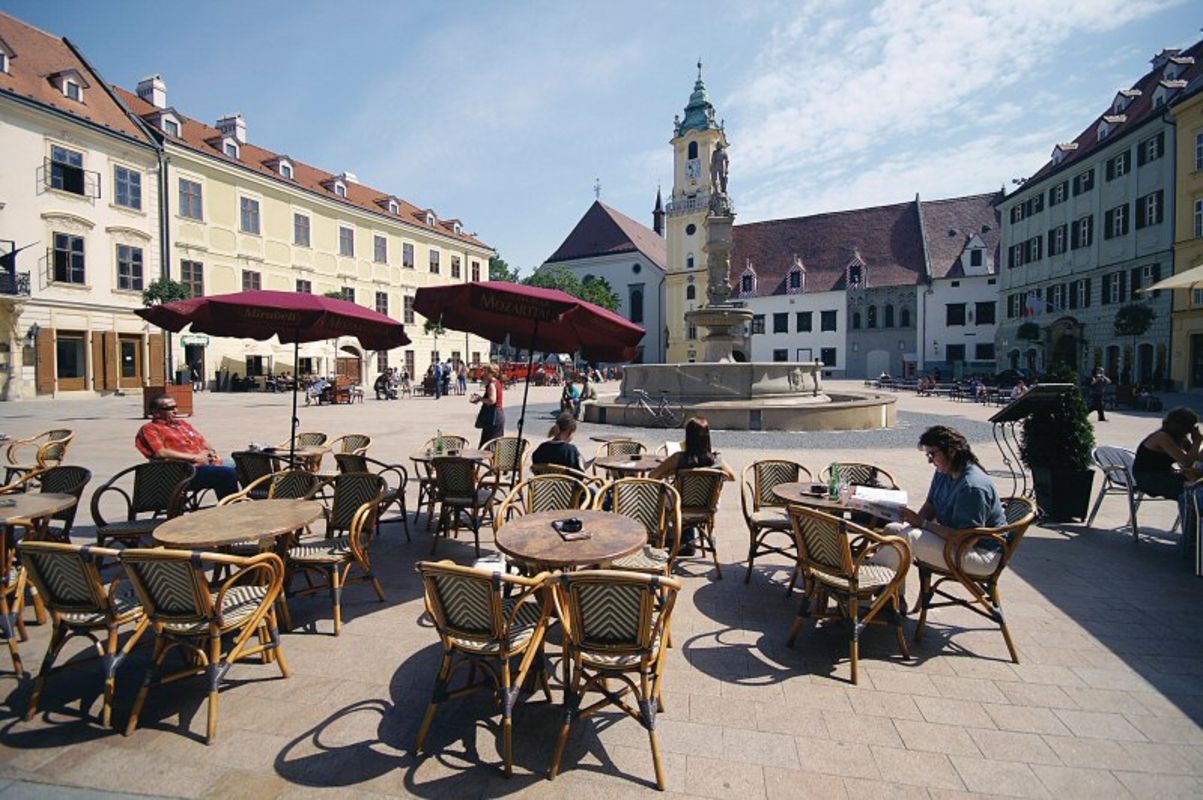