Every year in November, the festival One World brings to Bratislava films that are about real people of flesh and blood, and their real problems. The films are also about us and where and how we actually live. There are many questions and documentary films provide at least partial answers to those questions.

For the ninth time, the organizer of the Festival in Slovakia is the unincorporated association People in Peril. It focuses on the help to people that suffer due to natural disasters, military conflicts, and authoritarian regimes in areas of the world in crisis. It perceives the Festival One World as a means through which it offers the general public a glimpse "inside" - beneath the surface of problems and complex social, political, and economic relations.

Inspiring views of film makers from "our world" regarding events, actions, and phenomena that often seem to us as from some "other world" meet at the screens of Slovak cinemas. ONE WORLD does not wish to provide pessimistic answers. It rather wants to ask questions, reveal paradoxes, bring surprises, draw attention to cultural differences and different life perspectives and open these discussion topics. Besides other things, it offers the ability to enjoy life despite cruel circumstances, documents the diversity and richness of colours of the world and depicts stories of human perseverance. The Festival is a virtual bridge between "our" world, the "second" world, and the "third" world.

Besides film projections and interesting discussions on current topics you can enjoy also several concerts and photograph exhibitions. 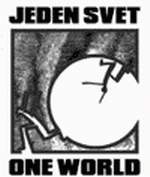