The Colonnade bridge in Piešťany in western Slovakia is the longest bridge fitted with a roof in Slovakia. It is the symbol of the spa Piešťany and one of the top creations of the functionalist architecture in our country.

The Colonnade bridge also called the Glass Bridge over the river Váh is 141,8 metres long and it connects the island Kúpeľný ostrov with the town. The longitudinal wall running along its centre divides it into two parts – the southern and northern.

The author of the idea to build this bridge is  Ľudovít Winter who was then administering the spa. The orders concerned the bridge with a narrow lane for cars, roofed pavements for pedestrians and with shops included. The Swiss engineer Schwartz and architect Emil Beluš produced the design, and the company Pittel and Brausewetter realized the construction in 1930 – 1933.  The artistic decoration of window panes is the work of Martin Benka.

The symbol of the bridge and the town of Piešťany is the statue of man breaking the crutch over his knee made to design ofRobert Kühmayer. It was cast in bronze by the company Barták Praha and set on the bridge in 1933. The historian who proposed the inscriptions on the façade symbolizing the healing power of the spa was Daniel Rapant. There are two: the bridge end facing the town bears the inscription Saluberrimae pistiniensis thermae (The best healing spa of Piešťany), while the inscription on the other side is bears the words of Bible: Surge et ambula (Rise and go). On 2 April 1945, the retreating German army destroyed the bridge but it was reconstructed in 1956. 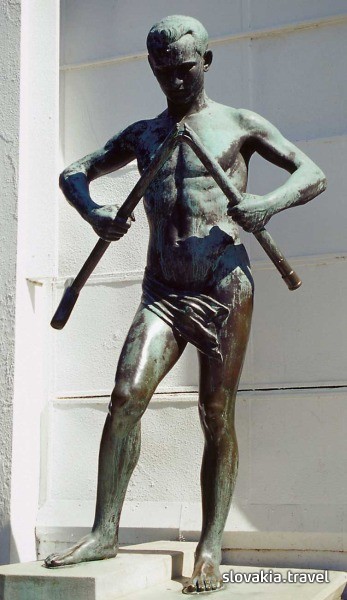