The town castle was once formed by several ancient buildings in the central Slovakian metropolis Banská Bystrica. Its task was to protect the income proceedings of copper and silver mining for the royal treasury.

The town castle was built gradually. The parish church was built as the first structure in the 13th century and fortifications were added to it in the 15th century. Earth ramparts and palisades were later replaced by tall stone walls fortified by bastions and a water dike. In the 16th century, the Turkish threat called for further fortifications. Only a quarter of the original town walls and three bastions - Farská (Parish), Banícka (Mining), and Pisárska (Scriveners) - of the original four have survived.

The castle's surrounding area includes not only a parish church and fortifications, but also the Church of the Holy Cross - Slovak Church, which was built in 1452, as well as a barbican with a tower. It used to be the entry gate to the castle. The barbican acquired its present Baroque facade after fire in 1761. Between 2005-2006 the barbican was restored again.

The castle also features Matej's House (Matejov dom), which was built in the 15th century in the late Gothic style, and the Old Town Hall - Praetorium which, for its part, was originally designed in the Gothic style, but later was reshaped into a Renaissance building. The latter is currently home to the Central Slovakia Gallery which holds graphic biennials plus a variety of temporary exhibitions on a regular basis.

Access: driving as far as the castle - situated in the city centre 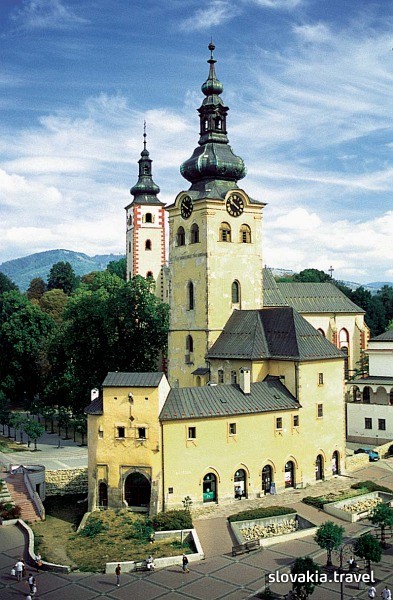