The small town of Medzilaborce, situated in the south-east of Slovakia, boasts of two European primacies. After the establishment of the first museum named after Andy Warhol, Medzilaborce has also erected the first statue dedicated to this representative of world pop-art.

Nowadays Medzilaborce makes most tourist profit from the fact that the parents of the representative of pop-art Andy Warhol originally came from this town.

In 1991 a unique museum, dedicated to the life and work of the world-wide known avant-garde artist, was opened there.

In November 2002 a fountain with the statue of Andy Warhol was placed here in front of the museum. The author of the statue is the academic sculptor Juraj Bartusz.

The statue in Medzilaborce, made of cast bronze, represents Andy Warhol with an umbrella, in his typical pose. The figure measuring 230cm in height is slightly relaxed and tense at the same time. The artist is hidden behind his glasses and in the imaginary shadow of his umbrella. 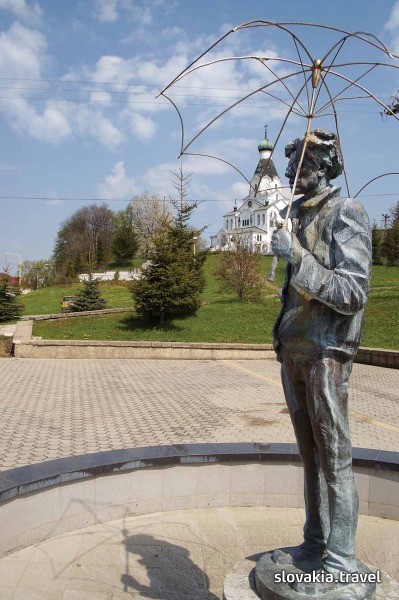